BCI and bats are the focus of a new “Survival Special,” now being filmed by Dieter and Mary Plage for Survival Anglia Ltd. The one hour film is tentatively scheduled to air in the United States on CBS in the fall of 1990. “Survival Specials” are televi
sion’s longest running wildlife series, garnering more than 70 international awards in the nearly 30 years since the series began. The program, in addition to covering the fascinating diversity and behavior of bats, will emphasize their uniquely important
environmental and economic roles around the world.

Filming began this spring in the Sonoran Desert at Bahia Kino, Mexico, where endangered long-nosed bats were shown pollinating cacti and agaves and where California leaf-nosed bats were filmed catching crickets. These and many other exciting sequences
were recorded in slow motion, most for the first time ever. Texas bats will be shown in vast emergences, rearing young, catching insects, and even tackling deadly scorpions, to which they are apparently immune. An American conservation success story will
depict the protection of endangered gray bats in Tennessee. The importance of fruit-eating bats to tropical reforestation will be documented around the world, especially in Costa Rica and French Guiana. Pollination of ecologically and economically importa
nt trees will be shown from Southeast Asia to Australia and East Africa, including Africa’s famous baobab. Flying foxes, their behavior, values and conservation needs, will be emphasized in Australia, Malaysia, Thailand, and Guam, while frog-eating, fishi
ng, and tent-making bats, among others, will be featured in Central America.

Merlin Tuttle is Scientific Advisor to the film, which also features the work of BCI. He will accompany the Plages to most locations over the coming year, appearing in the film, assisting with scientific accuracy, and training bats.

Dieter Plage has been making films for Survival Anglia for over 20 years and has won many awards, including ones for “Gorilla” (1974), “Orangutan Orphans of the Forest” (1976), “The Leopard That Changed Its Spots” (1979), and most recently “Cold on the
Equator” (1988). Plage has had his share of narrow escapes filming in the wild. He has been charged by elephants in Zaire and Sri Lanka, where he was literally run over by one, his camera still rolling to capture the incident. He has gone to great length
s to shoot many of the remarkable scenes in his films. To film pelicans in the Danikil Desert of Ethiopia, he disguised himself inside a stuffed museum pelican, swimming in a wet suit, over a mile each trip, through a caustic soda lake. He relied on this
disguise for nearly four weeks. For another film, Plage spent over 72 consecutive hours perched in an 80 foot high tower in the Okavango, waiting for fishing eagles to perform. This is Plage’s first experience filming bats, but he already has completed a
wide variety of truely sensational, first-ever footage of bats in action.

The film will be the first of its kind to feature bats and the work of BCI, reaching our broadest audience ever. Survival films are seen in over 100 countries, and this one promises to have an especially dramatic impact in furthering bat conservation
efforts worldwide. We’ll keep you informed of progress and scheduling. 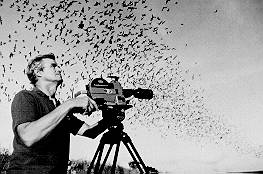