Bats are emerging rapidly from the darkness of ignorance and indifference. In recent years, they have become the focus of encouraging conservation activities in at least 20 states. The following account illustrates the progress, as well as the extent, to which BCI programs and educational materials are playing a central role. Florida, Minnesota and Pennsylvania are emphasized because of their especially noteworthy accomplishments.

FLORIDA— The Florida Game and Fresh Water Fish Commission has surveyed all known bat caves in Florida and currently is funding a habitat use study of Florida’s three species of tree bats. The state has published a management plan for endangered Gray Bats, has acquired and protected its most important bat cave (in cooperation with the U.S. Fish and Wildlife Service, the Florida Nature Conservancy and BCI), has obtained cooperative land owner agreements and has posted most bat caves. Bat status and needs continue to be monitored. Florida’s nongame program is funded by one-time fees for new registration of out-of-state vehicles, as well as from voluntary check-off contributions on renewals.

The state also is mounting a coordinated program of public education, using BCI materials. Bats have been featured in Florida Wildlife and The Skimmer, and a variety of articles and programs have been generated through the news media. The state has purchased six copies each of BCI’s slide/tape programs, “Saving America’s Bats” and “Bats: Myth and Reality”, and these are used on a regular basis by their three wildlife educators. Regional biologists also provide bat walk programs for the public, soon to be aided by QMC Mini Bat Detectors (now available through BCI). Additionally, some 40,000 Bacardi bat booklets and hundreds of BCI’s “Why Save Bats” brochures have been distributed to the public.

MINNESOTA— The Minnesota Department of Natural Resources Nongame Wildlife Program, using funds generated through its nongame checkoff on state income tax forms, is another
leader in bat conservation. The state has funded a bat survey to locate major bat hibernation sites and determine protective needs. This study already has been instrumental in saving one of North America’s largest bat hibernation populations, impacting bat survival across thousands of square miles over a three state area.

Most activity has been concentrated on public education. Bats have been featured in the Minnesota Volunteer and in a major exhibit (based on BCI materials) at the Bell Museum, as well as in a variety of articles and news releases by state biologists. The state also has acquired and is distributing 20,000 Bacardi bat booklets.

Twenty-four copies of ‘Saving America’s Bats” are in circulation throughout the state. Six copies are for use in state parks, six are used by region nongame specialists for conservation education programs, and 12 copies are in the Bureau of Information and Education film library for free loan to teachers and groups in Minnesota. The slide program also is often used by park naturalists who conduct evening bat walks, reported to be popular with family campers. Another type of program was developed by the state’s nongame Supervisor, Carrol Henderson, and features a shopping bag full of products that come from plants that rely on bats for pollination or seed dispersal in the wild.

Soft sculptures of bats, designed and produced by BCI member Stephanie Reynolds, have been featured at Project WILD workshops (designed to make wildlife education easy and attractive, Project WILD is funded in many states), the State Fair, and other programs sponsored by the Department of Natural Resources. Each stuffed bat includes an information sheet on the natural history and distribution of the species. With fake fur and satin wings, these soft sculptures help teach people that bats are interesting and not as scary as they may have thought.

Building bat houses is becoming popular, especially in areas with high mosquito populations. The Department of Natural Resources has published a booklet, titled “Woodworking for Wildlife”, that includes plans for a small bat house, and the state has built three large Missouri-style bat houses of its own. These have generated a great deal of public interest, and two are occupied. In each case, bats waited for a year to a year and a half before moving in. In one bat house, where careful observations were made, the first bats were seen after 18 months, 15 last year and 40 this year. The third bat house has been up for less than a year.

One of the bat houses was built at the Lindbergh Interpretive Center, near the Mississippi River in Little Falls, Minnesota. The Department of Natural Resources bought the materials, while the Center provided the labor and location. The state also produced a brochure and wall display for the Center, providing facts about bats and bat houses and suggesting that people can write to BCI for more information.

A major reason for Minnesota’s emphasis on bats in their Nongame Wildlife Program is that bats have been included on a list of state animals targeted in their long-range planning effort as especially in need of having their public image improved. The state Nongame Supervisor, Carrol Henderson, likes to tell Minnesotans, “if you still have a problem perceiving bats as worthwhile wildlife – just think of them as furry purple martins.”

PENNSYLVANIA— The Pennsylvania Game Commission has been censusing bat hibernating caves for the past three years, has gated one cave to protect endangered Indiana Bats and has obtained federal funding for a survey of abandoned mines to determine their possible use as bat hibernation sites. Most of their work on behalf of bat conservation is funded through Pennsylvania’s nongame check-off.

Eleven copies of “Saving America’s Bats” and “Bats: Myth and Reality” programs are used in public education statewide, and BCI’s publications are being used by state game officials in an effort to have the State Pesticide Board prohibit further use of Rozol (a highly toxic anticoagulant powder used against bats in homes in 19 states, despite federal warnings of potentially serious hazards to people).

Pennsylvania currently is rewriting its state game laws and plans to include strong, specific protection of all wild indigenous mammals, including bats, that we hope will set an example for other states.

OTHER STATES— State wildlife programs increasingly are becoming involved in bat conservation efforts. Missouri funds an active program, including surveys, habitat protection and public education. Five states, California, Kansas, Massachusetts, Montana and Washington, have featured bats in their state wildlife magazines, while four, Arkansas, Colorado, Illinois and Wisconsin (in press) have provided special publications about bats. Virginia produced a bat conservation bookmark. In each case, the article or publication was written by a BCI member or relied heavily on BCI information and/or photographs for its production, illustrating the key role that BCI is playing as a catalyst.

These states, and others, are involved in a variety of additional activities, ranging from surveys to determine bat needs, to protective actions to save critical habitat. Some already are heavily involved in education as well. Kansas, for example, is using 11 of our slide/tape programs and has prepared widely distributed news releases. Several additional states deserve mention, including at least Indiana, Iowa, Kentucky, Maryland, North Carolina and New York.

If you feel that your state’s accomplishments deserve greater recognition, please send us a report. If you live in a state that is making progress, please send them your congratulations. If your state has done embarrassingly little, let them know that too. You can make a difference! 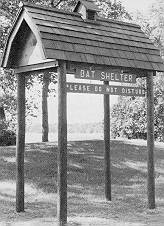 One of Minnesota’s “Missouri-style” bat houses. It consists of many vertical crevices of varied widths and is open at the bottom. Photo by Earl Johnson, MN D.N.R.