An all-night vigil in the Sonoran Desert reveals more than pollinating bats . . .

The coming of darkness doesn't quiet the nest of gila woodpeckers in the giant cardon cactus behind me. They're still chattering hungrily and the parents are still fussing about my presence. Earlier at dusk, when Peg Horner and I were setting up the equipment for our all night vigil, the mother bird watched us with growing agitation. Suddenly and with great intent, she took off from her perch. Direct hit. She left a big brown splotch on the front of my sweatshirt. Peg and I looked at each other in amazement. "She did that on purpose, didn't she?" I said with wonder at such resourcefulness. But she doesn't chase us away. We have work to do.

We have selected and numbered five cardon buds that we predict will open tonight. On a clipboard, each flower is listed in its own column, and here we will record each visitor, moth or bat, writing down precisely when it appeared. I have worked for BCI for four years and this is my first field opportunity. After all this time of writing about bats and cataloguing Merlin's photographs of bat behavior, I now will see it for myself.

I watch the last of Peg's flashlight bobbing into the night as she goes back to the Travelall for her two hours of sleep while I take the first watch. The moon is just a sliver above the horizon, the sky so clear and black that I can see the holes and smokey nebula in the Milky Way, the silhouettes of giant cacti faintly visible in the starry dark. This is the world of the bats I have come to see.

As I hear the truck's door close, I feel truly alone. I'm sitting in a beach chair in the gravelly sand of the Mexican Sonoran Desert, legs stretched out before me, clipboard and infrared headlamp in my lap, and the night-vision scope to my eye. We were right; all five of our buds are opening into flowers. The cactus glows an eery luminescent bright green through the scope, which magnifies the top where our flowers await visitors.

Having been primed before I came with tales of scorpions and rattlesnakes that hunt at night, my heart stops when I hear a rustle in the mesquite on my right. It rustles from one end to the other and then stops. Crunching sounds. Snakes don't crunch, I reason, quietly dialing on my headlamp to see who's there. A large brown pack rat sits up and looks at me, his fat white belly spilling over his toes, whiskers twitching. He ignores me and returns to munching mesquite beans.

The heat of the day dissipates quickly when the sun goes down, and I grow chilly sitting motionless in the sand with nothing to do but stare into the unchanging scene in the scope. In two hours, I record only a few moths and note a kangaroo rat scuffling behind me, joining the crunching of the wood rat and the periodic chatter of the baby woodpeckers. When you are still, the desert is not quiet at night. And then I hear the wingbeats. The bats are here. I hold my breath. Over my head I hear one slicing the air and then another, both headed somewhere to my left. Hush, I want to say to the rats, this is important. I don't dare take my eyes off the scope, but I see no one. By the time Peg comes for me, I am stiff and cold, ready for sleep.

Back in the truck I finally fall into a fitful sleep, glad I have brought my down sleeping bag. The alarm goes off too soon and I have a hard time shaking sleep off. Midnight. This is the watch most likely for bat visitors. Knowing this was my only chance to see them, Peg who would be here for the entire project, graciously allowed me the midnight to 2:00 A.M. watch. I stumble through the darkness, trying to find her without disturbing her observation. She too has heard the bats but has seen no visitors except a few moths that left without entering the flowers. We exchange paces, and I settle in again, sipping the coffee we have brought, now grown cold.

Moths occasionally drift into view across the scope, fluttering over the flowers, never pausing long. I hear the distinctive wingbeats of Leptonycteris, cutting the night air every now and then, but always on a path for points beyond. Time drags. The pack rat is still munching. No wonder he's so fat. Trying to identify a bird calling in the distance keeps me awake, but all I can guess is some kind of owl. Later I discover it was an elf owl, a tiny desert species often found nesting in saguaro.

It's after one o'clock and my second watch is almost over. Still no bats at our flowers. And then it happens. At twenty after one a single bat, its head and chest already dusty and luminous with pollen from another blossom, darts up from below to flower number two, giving it no more than a quick glance as it flies by and out of my view. Seconds later the bat is back with two companions. A creature so small it almost disappears into the blossom in the time it takes to blink, it dives into flower number two. I have seen so many photos of this, a bat frozen in the act of pollinating a cactus flower, but nothing has prepared me for the wonder of what I see. They are so quick I cannot be sure how many bats there are; at least three, maybe five. They disappear for seconds, sometimes a minute, and then they're back again, visiting the same flowers over and over, emerging from a blossom looking as though they were dunked in a bag of flour. The feeding frenzy goes on for twenty minutes and then as quickly as it began, it is all over.

Later, during my last watch, dawn comes with the distant cooing of hundreds of mourning doves, sounding like voices chanting in some unknown language. The night is over. What I regret is that what I have seen this night I have seen alone. And so few others will ever see such a miracle, in the dark in remote places, out of sight from the eyes of humans, but for those who have the advantage of technology enabling them to see in the dark. I wonder what other miracles are hidden from us, things we might see if only we are still.

Mari Murphy is Editor of BATS. 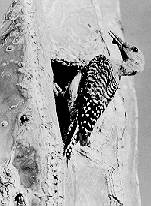 Before nightfall, a mother gila woodpecker feeds her hungry brood living in a cardon cactus. The giant cacti of the Sonoran Desert provide homes for many animals. PHOTO BY MERLIN D. TUTTLE 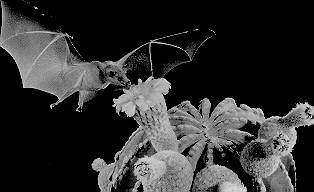 Caught in the act— the camera stops a long-nosed bat about to pollinate a cardon cactus flower. In nature, what you see here takes only a split second before the bat vanishes into the night. PHOTO BY MERLIN D. TUTTLE