A new program in California’s Sequoia National Forest is helping to ensure that bats can continue to make their home in the District’s abandoned mines. . .

In choosing a roost, bats often do not differentiate between “artificial” and “natural” habitat, merely seeking out the few available places that provide the right conditions. In many parts of the United States old mines fill this need, providing ideal roosting conditions for bats. In some cases, alternative roosting habitat no longer exists. Twenty-nine of North America’s 43 bat species rely on mines in some capacity, and some of our most endangered and threatened species are now highly dependent on them. Large aggregations are attracted to these cave-like structures, where bats become especially vulnerable to disturbance and eradication.

Public lands policy manuals, however, typically do not recognize mines as biological habitat. Failing to take wildlife into account means that bats living in old mines frequently become victims of a misinformed management agenda. Some of the most pressing conservation issues facing bats today arise from their propensity to roost in mines.

Dating back over 100 years, mining in the American West has left a pervasive and lasting mark on the landscape. Abandoned mines, particularly on public lands, present a significant management dilemma. Some mark the site of important mineral concentrations, and thus are subject to renewed exploration and reactivated mining. Others, with their associated buildings, are of considerable historic interest, calling for interpretive facilities and protection from decay, vandals, and souvenir hunters. Still others constitute a safety hazard to curious visitors ill-prepared to deal with underground exploration. In the last few years, liability concerns, plus a resurgence of mining in historic districts, have led to widespread mine-closure programs throughout the West, spelling death for many bat populations [BATS, Fall 1991].

A recently initiated project in the Greenhorn District of California’s Sequoia National Forest illustrates the problem and models a solution. Located in the Kern River drainage in the scenic western foothills of the Sierra Nevada Range, this District has over 500 old mines under its jurisdiction–hillsides riddled with shafts and tunnels, evoking legends of the Gold Rush days. The National Forest also provides prime habitat for one of California’s most threatened and mine-dependent bat species, Townsend’s big-eared bat (Plecotus townsendii).

Unfortunately for both the bats and mines, the Sequoia National Forest is also an area of intense recreational activity. Consequently, safety and fire concerns have overshadowed the historic and potential biological value of these mines. Some mines were being used as litter dumps and transient human shelters, and the potential for accidents or fires from illegal campfires was high. An offer from the Marine Corps to send volunteer troops armed with dynamite to close a number of old workings seemed to provide an ideal solution. That, however, was before the Forest Service appreciated the importance of mines to bats.

Just as their reclamation plans were being finalized last spring, Patricia Brown heard, by chance, of the proposed project. The first mines to be closed were within a few air miles of a known big-eared bat roost, and it seemed likely that this species was using some of the mines designated for closure as hibernating or maternity roosts. Urgent inquiries and written proposals by both of us were initially overridden in favor of safety considerations. As the closure date (at the height of maternity season) approached without adequate biological surveys having been conducted by the Forest Service, Elizabeth Pierson filed an appeal. Requesting a stay of proposed reclamation activities, she asked the District to take the ground-breaking step of developing a proactive bat-and-mine management program. The hope was that a well-designed program, addressing both biological and safety considerations, could then serve as a model for other districts throughout the West.

Reconsidering its position, the District energetically embraced this opportunity. The project was turned over to Resource Officer Patty Bates. “Once the Forest Service realized the significance of abandoned mines for bat habitat,” Bates said, “we knew the project needed to be modified.”

In early June, Brown conducted an initial field survey of the 17 mines slated for closure. She found that five contained bats or showed evidence of past use. Although only a few big-eared and Myotis bats were seen, accumulations of guano suggested that bats had used some of the mines extensively before disturbance from the growing numbers of human visitors forced them to abandon their roosts. Additional surveys in September, using night-vision equipment to monitor the evening emergence, revealed that significant numbers of bats were using the most complex and dangerous mine, the Kergon.

Based on the June surveys, mines that contained bats or offered appropriate roosting habitats were targeted for gating. Replacing dynamite with welding torches, the visiting marines constructed and installed four gates. “Through the cooperation of Drs. Brown and Pierson and the Marine Corps, we were able to install gates that would protect the habitat, while resolving public health and safety concerns,” Patty Bates added.

Although this collaboration between the Forest Service, the marines, and bat biologists worked for the benefit of bats, challenges remain. For example, the Kergon Mine, which of all those surveyed to date has the greatest potential as bat habitat, has an entrance so unstable that installation of a secure gate has thus far not been feasible.

This year’s successful pilot project is a first step in what the District views as a long-term program to identify and protect bat roosts, utilizing methods that also provide for human safety. Gates have been successful in protecting the roosts of many bat species throughout the United States, particularly in the East. In the West, a prime example of the value of gates on mine roosts was demonstrated in a project by the Homestake Mining Company in northern California. This project facilitated the recovery of a threatened big-eared bat population, proving that bats can be protected without compromising public safety [BATS, Spring 1989].

The U.S. Forest Service increasingly is taking the initiative on a number of other bat conservation measures across the United States, from building bat gates to educating the visiting public [BATS, Fall 1991]. Yet despite some successful projects, the critically important relationship between bats and old mines remains generally unrecognized at a national policy level. A model program, like that being formulated by the Greenhorn District of Sequoia National Forest, is an essential and timely step toward developing a management policy for bats and old mines. With a large proportion of America’s bats now dependent on abandoned mines for their survival, the future of these animals hangs in the balance as bat biologists strive to change perspectives and forge collaborations with land managers.

[bio]
Elizabeth D. Pierson has been studying the ecology and conservation biology of bats for 15 years in California and the South Pacific. Patricia E. Brown is a research associate in the Biology Department at UCLA. Over the past 25 years she has been involved in bat conservation in California. Both have been focusing much of their research on bat species in California that are particularly dependent on mines. Above: Patty Bates, a National Forest Service resource officer, stands before a newly gated adit. Townsend’s big-eared bats were found hibernating in the mine. 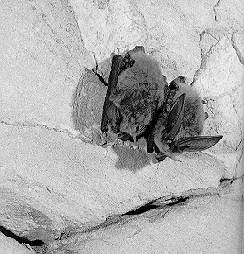 Townsend’s big-eared bats, a threatened species, are especially dependent upon mines for roosting habitat throughout California.