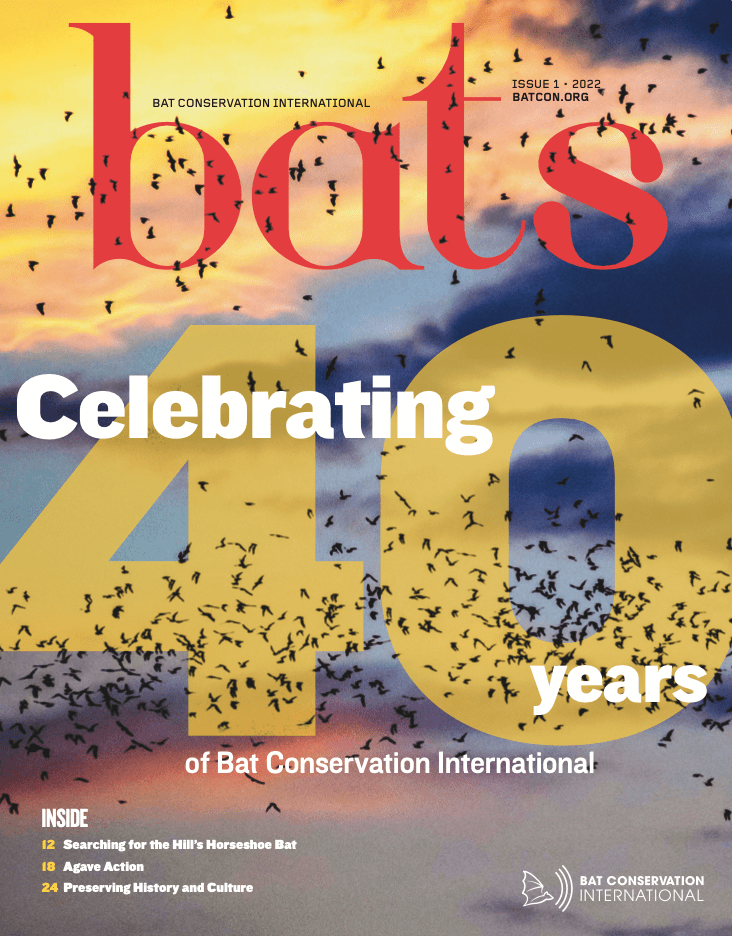 Dr. Jon Flanders’s feet pounded as he raced as fast as he could down the muddy road. Kicking up chunks of mud that splattered all over his legs, Dr. Flanders, Director of Endangered Species Interventions for Bat Conservation International (BCI), held an acoustic bat detector in the air with one arm up as he ran, hoping to catch as many fleeting sounds as possible. If the preliminary data meant what the scientists thought it did, the bat flying down the road—which he was racing after—was an incredible find. It was one that hadn’t been spotted in nearly 40 years: the Critically Endangered Hill’s Horseshoe Bat (Rhinolophus hilli).

It was January 2019, at the tail end of the dry season in Rwanda’s Nyungwe National Park, but the rain was relentless. Dr. Flanders and Dr. Winifred Frick, BCI’s Chief Scientist, were part of the multinational research team, including Dr. Julius Nziza from Rwanda and Dr. Prince Kaleme from the Democratic Republic of the Congo. They came together in the field for 10 days to study the park’s bats and search for the elusive Hill’s Horseshoe Bat, which is not found anywhere else in the world but at Nyungwe National Park. Before this expedition, this species was only known from two specimens, the last of which was collected in 1981.

At times, the scientists would huddle under a tarp strung up between two vehicles in a futile attempt to stay dry while working on sample collection. The team worked late into the night, then drove out of the park to catch a few hours’ sleep before getting up at 3 or 4 a.m. to try and catch bats to measure them and collect samples for DNA analysis before the sun rose. Their lodgings were located some distance away, and park rules did not permit them to stay in the park overnight.

Despite the weather and challenges, the team’s accomplishments were remarkable. In addition to ultimately confirming the presence of Hill’s Horseshoe Bats—a time-consuming process that involved intercontinental legwork—the trip also yielded another amazing find: the first record of the Damara Woolly Bat (Kerivoula argentata) in Rwanda. Additionally, it was the first time Lander’s Horseshoe Bat (Rhinolophus landeri) was recorded in Nyungwe National Park.

“The whole survey was really, really beneficial,” says Dr. Olivier Nsengimana, Founder and Executive Director of the Rwanda Wildlife Conservation Association (RWCA), and one of the project’s key collaborators. The Rwanda Development Board was also a crucial supporter, helping to facilitate the research by providing permits and assistance, along with African Parks and Nyungwe Management Company, which now manage the park.

Fifty-four bat species are known in Rwanda, many of them in Nyungwe’s nearly 400 square miles of rainforest. However, threats like habitat loss and fragmentation, mining, logging, fires, and other concerns threaten bats and other species.

The team captured two individuals they believed were Hill’s Horseshoe Bats in the field, but with so little known about the species, they had to wait to confirm the finding. The measurements and appearance strongly suggested these bats were Hill’s Horseshoe Bats: the nose leaf was slightly different from other Rhinolophus bat species in the area, and they had a very distinctive echolocation call compared with other local bats. The team was ultimately able to sequence DNA from the bats, providing the certainty they were looking for.

“Without a doubt, it was a Hill’s Horseshoe that we caught,” Dr. Frick says. “When we first saw the bat, we almost couldn’t believe our own eyes. Here was this remarkable animal, living secretly in the very heart of Nyungwe forest. For the past four decades, no one had seen a member of this species and yet it was here. I might have cried.”

Nyungwe National Park rangers have long played a key part in this research project, even before the international team traveled to the park to conduct fieldwork.

“Initially, before this field survey, we had to engage the rangers in the forest to try and identify all the caves,” Dr. Nsengimana says. “It was really helpful that the rangers sent the GPS coordinates of the caves in the forest—it helped with planning.”

When the researchers were in Rwanda, they worked closely with park rangers, hosting an acoustic monitoring workshop to enable them to conduct acoustic surveys with the Wildlife Acoustic bat detectors that the team left with them. Acoustic analysis is also useful because it reveals areas where bats may not be observed or captured by standard methods such as mist-netting.

“We trained and empowered the rangers to acoustically monitor bats for potentially identifying key foraging and roosting areas at Nyungwe,” says Dr. Paul Webala, Senior Lecturer at Maasai Mara University in Kenya, and one of the leads on the project.

From July 2019 to March 2020, the park staff and rangers collected 119 nights’ worth of acoustic data from 23 locations within the park. Typically, they would leave one recording device at a site for four or five nights. Once they collected the data, they would email the files to Bat Conservation International for analysis. During this time, Rwandan partners shared 262,896 files of bat calls—and they are still sending data.

In eight locations, they detected the distinctive call of a Hill’s Horseshoe Bat. While the researchers were thrilled to detect them, they only found them within a small range, demonstrating how extremely vulnerable this species is.

It also shows what a challenge it is to find this rare species, despite all the tools and skilled scientists working on the project. “It’s a large park, so it’s a ‘needle in a haystack’ sort of thing,” Dr. Flanders says.

Future projects in the works

The team hopes to return to Rwanda in the summer of 2022 to conduct further research, including catching Hill’s Horseshoe Bats and applying temporary radio tags to track their movements and learn more about where they roost. When they were examining the specimens they caught in 2019, the researchers noticed many similarities between the Hill’s Horseshoe Bat and a tree-roosting species of horseshoe bat in the Philippines. By tracking the bats, they hope to learn if this species roosts in caves or in tree hollows, where it would be even more vulnerable to habitat disturbance, such as logging, fires, or trees naturally falling.

Dr. Webala points out the importance of learning more about the species and its life history for its conservation. “It’s critical to have this information, a picture of where they’re roosting, for the conservation of this endemic and Critically Endangered species,” he says.

They also hope to collect fecal samples and learn more about their diet. The two Hill’s Horseshoe Bats they caught previously were just leaving their roosts, so they hadn’t eaten yet, making fecal sample collection impossible.

The whole team agrees that the highly collaborative nature of the 2019 expedition led to its success. “Working together is the key,” Dr. Nsengimana says. “It was a huge operation that brought together so many bat experts.”