With most of his free time devoted to designing and installing cave gates, Roy D. Powers, Jr. misses many of the holiday and birthday parties most of us take for granted. But even Powers had to stop for a celebration when friends brought a cake to the site of his 100th gate installation a couple of years ago. Given the 30-plus years he has devoted to cave conservation, this milestone was only one of many in Powers‘ career. In addition to being a cave-gate designer and consultant, he is a BCI workshop instructor, an engineering professor at Mountain Empire Community College in Virginia, and president of the American Cave Conservation Association (ACCA). At current count, Powers has installed more than 140 of his bat-friendly gates, and designed, engineered, or consulted on more than 600.

For this extraordinary dedication to the conservation of cave habitat, Merlin Tuttle presented BCI‘s Distinguished Service Award to Powers last summer at a BCI workshop at which Powers was an instructor. A caver since the age of 10, Powers‘ motivation for building protective gates is simply his inability to watch the destruction of precious resources that can‘t be repaired or renewed. As he and other responsible cave explorers eagerly explain, once the unique geology and biota of a cave ecosystem have been altered, they may never be returned to their original state. A large stalactite forms over thousands, even millions, of years, and once broken, will not be replaced. Some caves have evolved ecosystems and species found nowhere else on earth. In 49 years of caving, Powers has seen many broken stalactites and other frightening "before and after" situations in mistreated caves.

"A caver who is active for two or three years doesn‘t see this," he comments. "But after you‘ve been caving for twenty years or more, you begin to notice that the places you visited years before are not the same anymore."

In 1966, Powers crafted his first ad-hoc gate to protect a newly discovered cave. Over the years, he applied his engineering expertise to the problem, and he continues to improve his basic gate design. Accessible to most bats, the gates restrict human entry and minimize obstruction of airflow. This delicate balance is crucial to maintaining internal cave (or mine) conditions. BCI both uses and recommends Powers‘ basic gate design, officially called the "ACCA gate." Thousands of professionals who refer to BCI‘s Bats and Mines handbook are using Powers‘ plans as well, and a cave gating manual to be published next year will also feature the ACCA gate.

Installing gates can be difficult and dangerous work, as many BCI readers know from past BATS articles. Often the cave or mine is deep in a ravine, high on a cliff, or miles into a trackless forest. A typical job may involve transporting tons of steel and equipment and negotiating a maze of logistical obstacles–all in awkward places, often hours from "civilization," and frequently in bad weather. At one of Powers‘ jobs, seven people were struck by lightning, fortunately with no serious injuries. At Kingdom Come State Park in Kentucky, Powers and two other men hauled their equipment a mile and a half, climbed a cliff to a 31/2-foot ledge, and spent four days there building the gate, barraged by storms every afternoon. Yet Powers and his assistant, Rosa Stiltner, devote just about the entire summer every year to such tasks, typically collaborating with state and federal agency employees, and always relying on a network of dedicated volunteers.

"When working with Roy, no job is too large or project too difficult," says government partner Robert Currie of the U.S. Fish and Wildlife Service. Currie points out that, although many of the sites protected by Powers have been in the East, he has worked to protect important caves and mines in the western states and in other parts of the world as well. "Equally important," he adds, "Roy is always willing to help others learn the techniques needed to construct a well-designed gate."

There‘s no way to quantify how much damage Powers‘ work has prevented over the years, but he and colleagues at government agencies have been able to track some of the results in regard to bat populations. Many formerly declining colonies are now increasing, thanks to Powers‘ efforts. He has helped protect 98 percent of the roosts for North America‘s endangered Virginia big-eared bat (Corynorhinus townsendii virginianus). In fact, a 1997 Endangered Species Bulletin stated that the "future is looking brighter for the Virginia big-eared bat, thanks to the protection of caves it depends on . . . The Virginia big-eared bat has slowly increased in number since the early 1980s. . . . Populations in some caves in West Virginia grew as much as 350 percent from 1983 to 1995." When asked about the future, Powers talks about designing gates that can accommodate some of the more difficult species, such as endangered gray bats, which haven‘t responded well to gates at nursery caves.

As a founding member and current president of the ACCA, Powers‘ future goals for cave conservation center on education: symposiums, pamphlets, and school programs at the American Cave Museum, which he helped establish at the ACCA headquarters in Horse Cave, Kentucky. Otherwise, he says he simply sticks to the ACCA‘s unofficial motto: "If it‘s good for caves, do it." Powers has certainly taken the motto to heart. As ACCA Executive Director David Foster comments, "There are a lot of people who put things off, thinking ‘I‘ll get to that next year.‘ But Roy just goes out and does them." So what are a few missed holidays and birthdays when there‘s another cave to be protected?

Powers (far left) and his assistant, Rosa Stiltner (second from left), take a break with their mostly volunteer crew after completing this new cave gate at the Graphite Mine in New York last year. 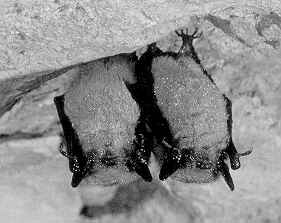 Covered with condensation droplets, a pair of little brown bats (Myotis lucifugus) hibernates in peace in a protected cave. Many caves that must be protected for bats in winter can be opened to explorers in summer. 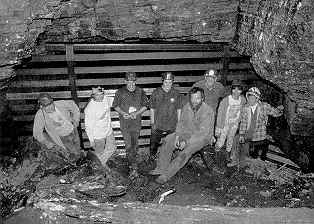 The construction team included representatives from the British Trust for Conservation Volunteers, the U.S. Fish and Wildlife Service, and the Nature Conservancy. The gate protects the hibernation site of an estimated 120,000 bats of at least six species, including endangered Indiana bats.