Nine species of Pacific Island flying foxes were added to Appendix II of CITES (Convention on International Trade in Endangered Species of Wild Fauna and Flora), effective October 1987. This is the first time that flying foxes have been included and means that increased attention will now be focused on their plight, although the actual legal protection from international commercial trade may be minimal. As a treaty between 96 member nations, CITES provides an international vehicle for the conservation of plant and animal species. Inclusion in Appendix II regulates, but does not prohibit, international trade. Appendix I lists endangered species and prohibits all international commercial trade, except in a few limited circumstances.

With assistance from BCI, the U.S. proposal was drafted by Arthur Greenhall, whose exhaustive work brought the available data together. A long-time BCI member, Greenhall is a zoologist recently retired from the Office of Scientific Authority, U.S. Fish and Wildlife Service. BCI also assisted with the IUCN (International Union for Conservation of Nature and Natural Resources) Trade Specialist Group analyses of the proposal which was submitted to the CITES Secretariat for consideration by the member nations. An amended version of the U.S. proposal was accepted at the biennial convention last year, providing control of trade in dead specimens only.

Enforcement of CITES is acknowledged to be difficult, and in the case of Pacific Island flying foxes, this may be doubly so; even biologists often cannot distinguish one species from another without careful examination. Species identification at departure or entry ports is further complicated by the fact that flying foxes destined for the table are often shipped frozen in blocks.

Attempts to have a number of species listed in Appendix I have not been successful, despite the fact that two were added to the U.S. Endangered Species List for Guam in 1984. One, the Little Marianas fruit bat (Pteropus tokudae), is very likely extinct as it has not been recorded in 20 years. A petition to declare the other, the Marianas fruit bat (P. mariannus), endangered throughout the rest of its limited range was filed early in 1986 with the U.S. Fish and Wildlife Service, but a decision is still pending.

Part of the difficulty in declaring any Pacific Island flying fox endangered is that very little reliable information about their past and present population levels is available. In many cases (the Little Marianas fruit bat, for example), species were already in severe decline before their plight was noticed. Since very specific information about the size of past populations is often required to gain endangered status, scattered anecdotal reports are of little value.

There are a number of factors contributing to the bats’ decline–among them, habitat loss due to human disturbance, such as urbanization, agriculture, and the introduction of non-indigenous predators. But by far the most serious threat to the survival of Pacific Island flying foxes is commercial hunting for human consumption. They are traditionally considered a great delicacy throughout much of their range, and they are now over-exploited. Some areas that have seriously depleted their own bat populations, such as Guam and Saipan, have contributed to the decline of flying foxes elsewhere by importing them. Fortunately for two flying fox species in American Samoa, importation became illegal when a law protecting them from commercial hunting and exportation was enacted in 1986 (BATS, December 1986). Ultimately, the goal is to end unregulated commercial exploitation and to provide appropriate management for all Pacific Island flying foxes, so that the problem is not simply shifted elsewhere when a given source is exhausted.

When one considers the vital role flying foxes play in Pacific Island biological diversity through their seed dispersal and pollination activities, one must also consider the potential for the extinction of other plant and animal species wherever bats disappear. In addition, the geological isolation of island ecologies leads to a high degree of endemism, and the consequences of the loss of such unique fauna and flora are incalculable. On Guam alone, it is estimated that at least 40% of the local tree species are dependent upon bats, and many of these are dominant in size and abundance. Population densities for the Marianas fruit bat have gone from probable past populations of up to 80 bats per square mile to current estimates of less than one. On the entire island of Guam, it is estimated that there may be less than 500 left.

Plants that rely on animals often require great numbers of their special pollinators or seed dispersers to continue their life cycle. There can come a point when an animal population falls so low that it literally becomes biologically irrelevant to the plants. This may already have happened to the Marianas fruit bat on Guam, where its drastic decline leaves un-serviced the majority of plants dependent upon it. Only time can reveal what this will mean in terms of future biological diversity. One effect already apparent on the island is the proliferation of fruit flies and fungi, benefitting from the abundance of rotting fruit that the bats would normally have harvested before it reached that stage. Such pests already have invaded local fruit orchards, making the importation of most fresh fruit a necessity.

The addition of nine species of flying foxes to Appendix II is certainly a step toward appropriate protection, and coming under CITES jurisdiction is a hopeful sign for the future of these important and beautiful creatures. It was a learning experience for all involved in preparation of the proposal and has brought the plight of Pacific Island flying foxes to the attention of many in a position to help. One clear fact is that long-term educational efforts are needed to make protective legislation work effectively for flying foxes.

Conservation biologists are already preparing for the next CITES convention in 1989, where it is hoped that this first positive move can be taken one step further. 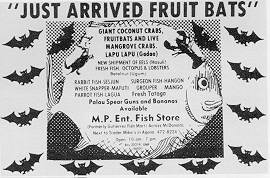 A newspaper ad in Guam attests to the local appetite for fruit bats. 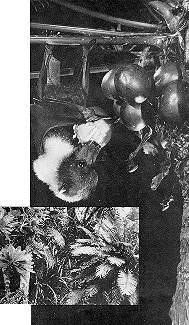 The endangered Marianas fruit bat is the only major seed-disperser for cycad trees on Guam, having the strong jaws and teeth necessary to penetrate the tough skin of the fruit, and perhaps most important, the ability to carry it away from the parent tree.

Without bats, the dense tropical forests on Guam would look quite different. Many of the dominant plants are bat-dependent and include wild breadfruit and the pandanus, cycad and fagot trees seen here. PHOTOS BY MERLIN D. TUTTLE