The unique geology of Devil’s Den State Park in northwest Arkansas provides an ideal winter home to one of the rarest bats in the United States. At latest estimate, the entire subspecies population of Ozark big-eared bats (Plecotus townsendii ingens) is less than 2,000 individuals. Devil’s Den, located in the rugged Boston Mountain region of the Ozark Highlands, is one of Arkansas’ most popular state parks, visited by nearly a half million people each year. This creates a potential problem for the bats.

Geologists theorize that between 10,000 and 70,000 years ago about 30 acres of mountainside broke free and slid into an adjacent valley. As it did, it cracked, creating vertical-walled sandstone crevices, ranging from only a few feet deep to 55-foot fissures. Several of the deeper crevices were covered by sliding layers of rock, resulting in the numerous fracture caves of the area. Devil’s Den Cave is the largest at a length of 550 feet. At the bottom of the second deepest crevice, Big-Ear Cave branches off 200 feet downslope. With its narrow, irregular entrance and descending passages, Big-Ear Cave is a trap for sinking cold air, thereby offering an ideal site for Ozark big-eared bats to hibernate.

The crevice area where these rare and endangered bats make their winter home has become one of the park’s major attractions. But since the geology of the area makes protection difficult, we have relied heavily on educating visitors about the bats. Visitors to Devil’s Den often ask why we put so much emphasis on bats in our programming; why not snakes or wildflowers or black bears? The reason is that the park is one of only two known sites in Arkansas where the Ozark big-eared bat hibernates. This bat and its cousin, the Virginia big-eared bat (P.t. virginianus), are the two endangered subspecies of the western Townsend’s big-eared bat, itself on the list of proposed candidates for endangered status. As the name implies, big-eared bats have very long ears, up to an inch and a half. While hibernating, they may hold their ears either erect or coiled like a ram’s horns (plecotus, the scientific name for this genus, is derived from two Greek words: pleco, meaning twisted, and otus, meaning ear).

Since 1989, a large portion of the interpretive programs at the park has been devoted to educating the public about bats. Devil’s Den features a variety of bat education programs for park visitors, as well as out-of-park programs at area schools. Audiovisual programs and support materials from BCI are integral to our educational efforts. In addition to our ongoing programs, we hold a special summer educational event. Bat-O-Rama is an entire weekend of programs devoted to bats and has been extremely popular (it will be held this year July 17-18-19).

During each winter’s endangered bat count at the park, observations have shown that big-eared bats prefer to hibernate in the coldest parts of Big-Ear Cave where the temperature is barely above freezing. Up to 60 bats have been observed here, the majority in two clusters under a waist-high ledge. The total number of big-eared bats occupying the crevice caves probably numbers less than 100. The scarcity of these animals and their susceptibility to disturbance while hibernating calls for special protection, especially since Big-Ear Cave is located only a short distance off the most heavily traveled hiking trail in the park.

For many years, the crevice area was off-limits to visitors since we believed that the bats wouldn’t be bothered if no one knew the caves were there. But many visitors already knew about them or inadvertently stumbled onto the crevice area because of its proximity to the main trail. Evidence of litter in Big-Ear Cave suggested that visitors were entering even after an interpretive “keep out” sign was placed at the entrance. It was obvious that more drastic measures were needed.

A gate designed to allow bats free access but to keep people out is the usual solution to such problems, but the irregular geology and shape of the cave entrance led bat experts to question the feasibility of installing one. Some kind of cave-entry alarm seemed to be the solution, but to our knowledge such a device did not then exist, and no action was taken for several years.

Then in May 1991 Rex Roberg, the Endangered Species Specialist with the Arkansas Game and Fish Commission, informed me that the U.S. Fish and Wildlife Service had placed $10,000 in their budget for cave protection at Devil’s Den State Park. All we had to do was to find someone who could design an alarm system to meet our specific needs. We contacted Rod Russell at Ozark Instruments, inventor of the spelogger, a device that monitors cave visitation, logging in the time and date of each occurrence. About 30 speloggers are in use around the country. I told him about our special situation and needs and asked if he could design a cave-entry alarm system for Big-Ear Cave. He accepted the challenge.

Last fall his custom-made alarm system was installed. The sign at the entrance now emphasizes that the cave is alarm-protected, also stating that Ozark big-eared bats are an endangered species and that persons disturbing or harming them are liable for fines up to $50,000. Theoretically, the sign should be enough to deter anyone from entering, but some visitors still can’t resist exploring.

The best way to describe the alarm system is to detail what happens when someone tries to enter the cave. First, a sensor detects light from the intruder’s flashlight. A signal then passes from the sensor through a heavy-duty cable to a transmitter controller located outside the crevice. This box contains a 12-volt rechargeable battery and a unit that decodes the signal before sending it to the transmitter. The decoder can send two different signals: one indicating the cave has been entered, and another if someone attempts to tamper with the equipment.

The transmitter then sends a radio signal to a receiving antenna at the visitor center a half mile away, activating an audible alarm in park offices. After hours, we activate an automatic telephone dialer with a recorded message. If an alarm signal is received, the dialer phones a ranger’s residence and the local wildlife officer and delivers the message.

The good thing about this complex system is that it works. The weekend after the system was installed, I received a recorded message that Big-Ear Cave had been entered. Jessee Cox, the park superintendent, and I responded, arriving just as two young men were leaving the cave. To say we had surprised them would be an understatement, but since the bats were not yet present and the new warning sign had not been installed, all we could do was

[continued to page 18]
to educate them. Most park visitors don’t realize that by simply waking a hibernating bat they may be causing its death. A bat survives the winter on stored fat reserves that become depleted if they are awakened too many times [BATS, Fall 1991].

Posting the new sign informing would-be explorers not to enter and stating that Big-Ear Cave is alarm-protected was as important as installation of the system itself. The main goal, after all, is not to catch someone in the cave, but to keep people out. During the first winter season, both the sign and alarm appear to have done their job well.

One of the features of the new alarm is that other caves in the area can eventually be tied into the system. This is very important since we could well discover another major Ozark big-eared bat hibernaculum. After seven years of work at Devil’s Den, I still find a new cave almost every time I explore its fascinating crevice area. Thanks to Rod Russell’s alarm, Ozark big-eared bats should have a safe, disturbance-free place to hibernate for as long as these endangered animals choose to make our park their winter home. 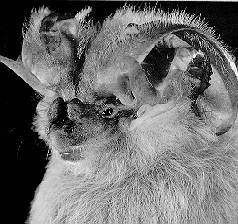 Above: As their name implies, big-eared bats have large ears. When active, their long ears are erect, but in hibernation, their ears are often curled like ram’s horns. 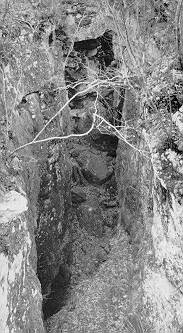 The park’s crevice area is attractive to explorers, creating problems for Ozark big-eared bats, the park’s rare and endangered winter residents. The alarm system protecting Big-Ear Cave has been successful in keeping would-be explorers out during the first winter season since installation.

[Bio]BCI member Harry Harnish has been a park interpreter with the Arkansas State Parks for 13 years. He has worked the last seven years at Devil’s Den.