Conservationists tried to protect the bats at this important New Jersey site many years ago; this summer they finally succeeded…

ONE OF THE most difficult aspects of bat conservation is often the lengthy waiting required. First, owners of essential habitat must be convinced that bats are important. Then, great patience may be required to proceed through unavoidable legal and other red tape, often while thousands of animals are being destroyed by vandals or other causes. Protecting the Hibernia Mine in New Jersey, one of the most important bat hibernacula in the Northeast, was no exception. This summer, after many years of effort and at least one near disaster, the mine at last received a protective gate.

The Hibernia Mine was first worked as early as 1722. The “Adventure Furnace,” later to become the Hibernia Fumace, supplied shot and ordnance for the Continental Army during the Revolutionary War. For nearly two centuries, a series of mines and trenches, collectively known as the Hibernia Mine, produced over five million tons of magnetite ore. During the mine’s long history, a total of 12 vertical shafts would eventually be sunk, two to depths of 1,600 and 2,800 feet. The deeper shafts provided as many as 26 underground working levels. Hibemia was still the fourth largest ore producer in the state when it was abandoned in 1913.

We may never know exactly when bats first found the wealth of tunnels in the abandoned mine, or if they were present before the mining activities ceased. There is, however, a rich legacy of bat research at this site. Hibernia had become, and continues to be, the most important bat hibernaculum in New Jersey.

The earliest documentation of bat use was by Harold Trapido and James Kezer in December 1939 when they found several thousand little brown bats (Myotis lucifugus) and lesser numbers of eastern long-eared bats (M. septentrionalis). Over 30 years later, in 1970, John McManus and Robert Esher reported over 6,000 bats in the mine during their research on the hibernating behavior of little brown bats. Little brown bats remained the dominant species, with the eastern
pipistrelle (Pipistrellus subflavus) accounting for less than one percent of the total numbers.

John Hall banded thousands of bats in Hibernia in the 1960s and 1970s. Two of these banded bats were recovered in the mine as recently as 1990 and 1991, demonstrating their fidelity to the roost. Early on, he recognized its importance as a bat hibernating site and tried, unsuccessfully, to have a protective gate installed to deter increasing vandalism. In the mid-1960s, the main entrance had been haphazardly covered with old mine rails, angle-iron, and a steel plate to keep
people out. Over the years, the cover was breached, and more material was either nailed or welded to the existing materials. Hall returned in 1980 and surveyed the mine again, estimating that over 20,000 little brown bats were now using the mine.

Nine years later, in 1989, the landowner sealed the remaining shafts and covered the last tunnel entrance with a one-foot-thick wall of cement to put an end to years of vandalism and liability. The surrounding hillsides were slated for development; luxury homes and golf courses were to be built over the old mine.

At this point, the bats in the Hibernia Mine were essentially entombed, the only openings reduced to several four-inch squares. Local citizens, knowing about the bats, were concerned about their survival and contacted Bat Conservation International and the Endangered and Non-game Species Program of the New Jersey Division of Fish, Game and Wildlife (ENSP). Bureau Chief Jo Ann Frier-Murza, in consultation with BCI, got the mine entrance reopened in time to save the bats. A two-foot-high by three-foot-wide opening was left for the bats as a result of negotiations between the state and the landowner. Reopening the entrance, however, also led to renewed vandalism. A protective gate was planned for the spring of 1990 [BATS, Winter 19891990], but when land ownership changed, the fate of the gate and the well-being of the bats were left precariously unanswered.

IN FEBRUARY 1992, I accompanied two BCI members, Susan Ellis and Eileen Muller, along with Brian Reizfeld, into the Hibemia Mine to conduct a bat count. We were working as volunteers to supply the ENSP with data. To the best of our knowledge, an accurate count had not been conducted in the mine for at least two decades. As BCI members, we were familiar with the eight bat species native to New Jersey, either through BCI field-study workshops or through our personal experience with bats.

While counting the bats, we came across a small group that appeared slightly different from the majority of the bats that we had seen. We determined that they were Indiana bats (M. sodalis), a federally endangered species. This was exciting news. Not only was it the first record of these bats in New Jersey, but if confirmed, their presence could open the way for prompt protection of the mine. The final count for the day was 26,246 little brown bats, followed by 19 Indiana bats, 17 eastern pipistrelles, and two big brown bats (Eptesicus fuscus). We immediately informed ENSP of our discovery.

Last year, ENSP zoologist Jim Sciascia invited U.S. Fish and Wildlife Service biologist Annette Scherer, and Alan Hicks, a wildlife biologist with the New York Department of Environmental Conservation, and me to confirm our previous observations. We found the Indiana bats within 10 feet of their previous location. Officially confirming their presence set the stage for the federal and state governments to obtain the necessary funding for a gate to protect the endangered bats and the other overwintering species. BCI played an integral role in seeing that the project was carried out, providing guidance and assisting with funding.

Through the coordinated efforts of the U.S. Fish and Wildlife Service (USFWS), the ENSP, BCI, and Roy Powers, Director of the American Cave Conservation Association, a gate was built to protect the mine and its bats. The operation took place this summer. Annette Scherer, John Cochner, and Mel Smith of the USFWS, Mike Valent and Ellen Pehek

of the ENSP, and I assisted Roy Powers in building the gate. After a more than 20-year wait, it took only three days to construct the 10-foot-wide by 15-foot-high gate.

While Roy was pounding steel with a small sledge hammer, I let my mind wander to a time long ago when the mine was being worked without the modern tools we were using today. I imagined blasting rock, laying rail ties, and transporting buckets of ore, with the noises echoing off the walls of the mine. I envisioned hard-working men battling the geological forces of the earth. They excavated a mine, not knowing that they were also building a critical roost for bats sometime in the distant future.

The hammering stopped, and I realized that the long wait was over too. Roy swung the door of the gate closed. It worked. The spirit of camaraderie filled the air as we celebrated the conclusion of another page in the history of the Hibernia Mine.

(Bio)
Rick Dutko is a senior nongame zoologist for the Natural Heritage Program within the Division of Parks and Forestry, New Jersey Department of Environniental Protection. He is also a member of BCI. 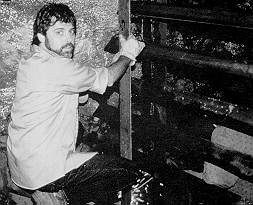 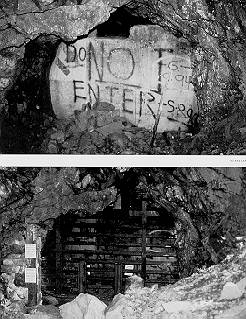 Despite a cement wall (right), the mine was heavily vandalized for many years, and the hibernating bats were severely disturbed. The new gate (below), with signs officially designating the mine as an endangered species area, will allow the bats to sleep in peace at last.