One of BCI’s first projects involved Thailand. BCI Vice President, Verne Read, funded and participated in a trip to investigate the conservation needs of Thai bats.

The trip focused world attention on the value and plight of Thailand’s bats (see January, 1984 SMITHSONIAN MAGAZINE), resulted in a royal decree to protect one of Thailand’s most important bat caves, and generated funding for Thailand’s first study of endangered bats.

As a result of this study the Species Survival Service Commission of the International Union for the Conservation of Nature and Natural Resources has placed the Kitti’s Hog-nosed Bat on its list of the world’s 12 most endangered animals, and Mr. Duangkhae is now a professional bat biologist and one of Thailand’s leading young conservationists.

Using 85 of Dr. Tuttle’s slides of Thai bats and other BCI information along with his own findings, Mr. Duangkhae already has published a variety of articles on bat values and conservation needs in major Thai magazines. He is now continuing his studies of endangered bats and assisting with conservation planning. 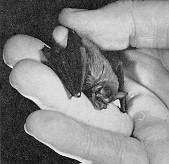 The Kitti’s Hog-nosed Bat (Craseonycteris thonglongyai), discovered in 1974, weighs a third less than a penny. This bat, the world’s smallest mammal, was soon extirpated from Sai Yok, a National Park created in its honor, by souvenir and museum collectors. Surapon Duangkhae recently surveyed surrounding cave habitat and documented the survival of 2,000 Kitti’s Hog-nosed Bats, all in a limited and vulnerable area without protection. Hopefully, he and Thai officials will be able to save them. Photo courtesy Merlin D. Tuttle