The campaign is having great success. A press file, publicity brochures, color posters, a film, plastic information boards for outside use, and free pamphlets have been prepared and distributed through the associations who are supporting the project. There are also plans to hold training courses and protection operations, and a national colloquium during October 1985 in Rouen, France.

Several cavities and old buildings already have been protected as reserves for bats during hibernation and reproduction periods, and specially designed roosting boxes have been placed in trees and under bridges. The coordinators are seeking financing and information concerning the effect of treated wood on the health of bats. They can be contacted at the Federation Rhone-Alpes de Protection de la Nature, section Isere, 4 rue Hector Berlioz, 38000 Grenoble, FRANCE.

Artificial Bat Hibernacula in the Netherlands

Bats have been protected by law in the Netherlands since 1973, but legal protection is sometimes not enough to save them. People still harm them, and bats are still threatened by loss of habitat and through the use of wood preservatives and pesticides,

Dr. Aldo M. Voute of the State University of Utrecht, who has been involved in bat research and protection for nearly 25 years, reports that he has instigated the construction of artificial bat hibernating sites in the Netherlands. Current government regulations dictate that sound barriers be erected between motorways and residential areas. Concerned with the increasingly endangered environment in a densely populated country, authorities in the village of Houten near the town of Utrecht wondered if their barrier could contribute to nature conservation.

Following Dr. Voute’s advice, an artificial bat “cave” was constructed in 1983 inside the dike with a T-form corridor made of large, discarded sewer pipe elements. The corridor was then protected by a grid, and an insulated door was provided with an entrance slit. A second hibernaculum was constructed in 1984, and on a cold, snowy day in March 1985 it was inaugurated by Houten’s town-mayor.

Although the artificial hibernacula have yet to harbor any bats, Dr. Voute is convinced that bats eventually will inhabit them. Several similar World War II subterranean buildings have become important hibernation sites, sometimes housing hundreds of bats. The initiative has already stimulated other Dutch towns to consider construction of similar hibernacula.
The Ministry of Cultural Affairs, Recreation and Social Welfare in cooperation with the Committee for Bat Protection has produced educational leaflets and posters which are being distributed throughout the country, and a clearing house for information on bats has been established (“Bats Need Your Protection,” P.O. Box 5406, 2280 HK Rijswijk). To further the campaign, the Wildlife Fund and the Ministry have donated money to create bat hibernation reserves in abandoned caves, ice cellars, and World War II block-houses and old fortresses. One reserve for Common Noctules (Nyctalus noctula), a species living only in hollow trees, has been established and the highly endangered summer roosts of the Pond Bat (Myotis dasycneme) have received special attention.

Bats Return to Cavern in Italy

The lower caverns of the Grotta della Regina Margherita in Collepardo, Italy are now closed to the public, thanks in part to the efforts of Captain John Leslie who gained the cooperation of the mayor of Collepardo and helped stimulate interest among several nature groups and the Lega Italiana Proterzione Ucelli. The caverns are home again to colonies of Schreiber’s Bats (Miniopterus schreibersi) and a smaller number of endangered Greater Horseshoe Bats (Rhinolophus ferrumequinum). They had deserted their roosts when lights were installed and the caverns opened to the public.

Captain Leslie returned to the site to check the bats’ progress a year after the caverns had been closed, waiting for their evening emergence. He counted as least ninety Greater Horseshoes and approximately four hundred Schreiber’s Bats, demonstrating how quickly bats will return to former roosting sites when left undisturbed. 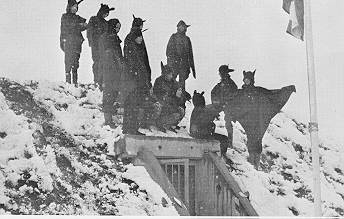 Immediately after an opening ceremony the Houten bat hibernaculum was visit d by a colony of bats,” a group of school children dressed like bats, emphasizing their concern for conservation. Photo courtesy Dr. Aldo M. Voute.