During the Second World War, Nazi Germany left behind an aftermath of suffering still felt by many who lived through the terror. Here and there, however, the former regime has, quite inadvertently, bequeathed a few legacies with unexpected benefits. Among them are the extensive subterranean defenses built for German troops throughout eastern Europe and in the west. Today, many of these far-from-beautiful structures are important hibernation quarters for at least 12 species of bats that have moved in over the past 45 years.

One notable example is in Poland near the town of Nietoperek. The Miedzyrzecki bunker system has become the most important bat hibernation site in central Europe. Built between 1933 and 1945 on former German territory along the German-Polish border, this never-completed line of defense is comprised of an extensive series of underground passages approximately 18 miles long and covering an area of about nine square miles. Tunneled between 100 and 164 feet below the surface, the passageways are connected to the outside world by several vertical air shafts.

In the early 1970s, Zbigniew Urbanczyk, a Polish bat researcher, discovered that during winter months large numbers of several bat species converged in the passages. A count, conducted during the winter of 1988-89, revealed more than 6,000 mouse-eared bats (Myotis myotis), over 10,000 Daubenton’s bats (Myotis daubentonii), hundreds of brown long-eared bats (Plecotus auritus) and Natterer’s bats (Myotis nattereri), and smaller numbers of six other species, including one of Europe’s rarest bats, Myotis bechsteinii. True numbers are likely much higher since the entire system cannot be investigated thoroughly. There is so much water in some passageways that entering them is virtually impossible for researchers.

Since 1975, Urbanczyk’s surveys have revealed that at least 20,000 bats hibernate in the investigated areas, with probably another 10,000 in remaining passages. This information was reason enough for Polish authorities to declare a little over four miles of the bunker system an officially protected bat reserve in 1980. The significance of the Nietoperek Bat Nature Reserve is heightened by the presence of large numbers of species that elsewhere in Europe have sharply decreased (mouse-eared bats), or that are not found in such large groups (barbastelles). It is almost certain that bats are drawn from a wide radius to this unique hibernation roost each fall. Banding bats has shown that the large groups of hibernating mouse-eared bats include some from as far away as western Germany. Others, it is presumed, come from throughout Poland and adjoining countries. This assumption is borne out by the fact that, in the vicinity of Nietoperek, only one relatively small breeding colony of mouse-eared bats is known, which returns each spring.

Despite the importance of the system and protected status for most of the portion that shelters bats, the Polish government once planned to designate the underground passages as a dumping site for nuclear waste. Realizing the enormity of the threat, Polish bat scientists raised the alarm and alerted colleagues in other European countries. Action taken in 1988 by the Flora and Fauna Preservation Society (FFPS) in England was particularly effective. In response to a letter from FFPS, Poland’s Minister of the Environment declared, “there will be no radioactive waste landfill” at Nietoperek.

That, however, has not solved other serious problems for the bats. One unfortunate result of the bunkers being declared a reserve for bats was increased publicity, which has brought an influx of sightseers on weekends and holidays for the past decade. At times, hundreds of unsupervised people crowd the tunnels, greatly disturbing the hibernating bats. People have also been seen directly harassing the bats, wielding sticks and holding torches to large groups roosting on the walls. Although bats are protected in Poland, such laws are not enforced and few are aware of them.

Entering the tunnels without expert guidance and proper lighting is also hazardous for visitors. A few years ago a female visitor slipped when entering one of the bunkers, falling to her death down a 100 foot deep shaft.

As winter habitat for thousands of hibernating bats, Nietoperek has thus become highly vulnerable. Even though declared a nature reserve, no gates prevent the public from entering the protected section. In addition, only a portion of the bats hibernate in the protected area, highlighting the need to declare the entire system a sanctuary. In an attempt to call international attention to the problem, Polish scientists have arranged special trips for foreign bat experts in the last two years. German, Danish, Dutch, and English specialists have been guided into the bunkers by their Polish colleagues.
As a result of these excursions, scientists and conservationists concur that it is possible to implement measures whereby the welfare and safety of both the bats and visitors to this historic site could be served. Bat experts recommend that: 1) all entrances be protected so that bats have free access, but the public is kept out; 2) only a few safe entrances be fitted with entry gates for the public; 3) the system be open from May to September for guided tourism (when bats are not present), with only a limited number of scientists admitted during the rest of the year; 4) a small entry fee be charged to tourists, with receipts used to maintain the safety of the system. In addition, a built-in, unused, narrow-gauged railroad could be restored, thereby facilitating tourist transport and thus enhancing the attraction of the entire complex.

In the meantime, Polish bat biologists recently organized the Lubusian Naturalist’s Club, which actively sends out information about the site to nature protection organizations and nature travel agencies in Poland and abroad. It is their hope that, by attracting nature tours, they can raise awareness of the need to protect the site and that they can begin raising funds for the costly initial phase of building gates to protect all entrances. Other conservationists hope that raising funds through tourism, which could have the effect of further disturbing the bats, will only need to be a “last resort” measure.

The Polish government agreed in 1989 to protect the bat hibernation quarters, but with the political upheaval of the past several years and an already stressed economy, they have done little to implement protection measures. Once the first steps have been taken, it should be possible to protect the Nietoperek Bat Nature Reserve for people and bats for many long years to come. As natural hibernation sites are destroyed through urbanization or are repeatedly disturbed by people, bats often have little choice but to make use of artificial roosts like the Miedzyrzecki bunker system. For some, it may be the last place left.

Aldo M. Voute has been involved in bat research and conservation for over 25 years. He is curator of the museum of the University of Utrecht in Holland.

NOTE: BCI members can lend their support to Polish bat biologists by writing to: Zbigniew Urbanczyk; Lubuski Klub Prsyrodnikow; U1. 1 Maja-200; Swiebodzin, Poland. Your letters urging the Polish government to implement protection measures may help Urbanczyk to convince officials of the importance of protecting this vital bat hibernation site. 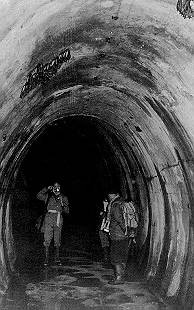 An elaborate bunker system left over from World War II has become Poland’s most important hibernaculum for at least 12 species of bats. Even though designated as a nature reserve, hibernating bats are continually disturbed by sightseers. 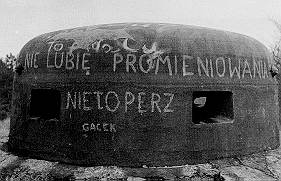 After strong protests from scientists, the Polish government scrapped plans to use the bunkers as a radioactive waste storage site. Graffiti on the unsightly entry to one of them reads, “I don’t like radioactivity; signed, the long-eared bat.”