AN EDUCATIONAL EXHIBIT of Merlin Tuttle’s bat photos opened to an enthusiastic audience at the Man and Animal Museum in Ramat-Gam, Israel, in January. Over 500 people attended the opening. The exhibit is co-sponsored by Bat Conservation International and Delta, Inc, the distributor of Kodak film in Israel.

BCI member Dr. Benny Shalmon, director of the Israel Mammal Information Center, organized the exhibit, which features 38 photos of bats with educational captions. He gave two lectures and showed off a fruit bat who delighted curious children and adults by eating a banana. The exhibit is especially geared for children (though parents are welcome too!). Shalmon hopes to educate the next generation about the importance of bats and correct some of the many misconceptions about bats that have led to the severe decline of insect-eating bats in Israel [BATS, Winter 1989-90].

The exhibit attracted a great deal of positive media attention, including television and radio interviews and numerous newspaper articles about bats. After a two-month stay in Ramat-Gam, the exhibit will travel to other museums and cultural centers in Israel. 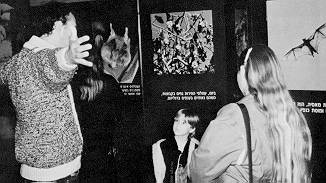 Flying foxes are "this big" a father explains to his son at a new traveling photo exhibit in Israel.