The Philippine archipelago is one of the largest aggregations of islands in the world, with over 7000 islands said to be included within the country's boundaries. Not surprisingly, the country also supports a fauna that is exceptionally rich in unique species of mammals. Among the most spectacular of these are the flying foxes, members of the family Pteropodidae. The largest bat in the world occurs here: Acerodon jubatus, an endemic species, weighs up to 2.5 pounds (1.1 kilograms), although it is second to at least one other species, Pteropus vampyrus, in wingspan. The latter reaches six feet, but averages less in weight. Smaller members of the family also are widespread in the Philippines, with at least 15 species present. The smallest, Haplonycteris fischeri, weighs only about half an ounce (16 grams). Many are economically beneficial as pollinators of fruit trees, dispersers of seeds of forest trees, and as a source of guano for fertilizer. The spectacular diversity of Philippine fruit bats is still being documented; three species have been described as new to science since 1969, half of the total discovered throughout the entire range of the family! Recent field work has shown that it is regrettably too late to learn more about at least one species, and that several more are seriously endangered.

The economics of extinction
News of the Philippine Islands has frequently appeared in the western press in recent years, and most people are aware of the current economic and social troubles. However, few appreciate that these problems translate directly into trouble for the country's wildlife. With 56 million people on a land area equal to the state of New Mexico, much pressure is necessarily placed on the area's natural resources. Since the end of World War 11, deforestation by logging companies and subsistence-level farmers has, for example, reduced the primary forest cover on Negros Island from about 60% to about 6%. The need for fertilizer for sugar cane fields, the island's principal source of currency, has led to mining of guano deposits in nearly all of the island's caves. Periodic reduction in sugar prices has led to layoffs of manual laborers, who must find new farm land in the mountains if they are to feed their families. They must use all sources of protein available to them, including colonies of the large flying foxes.

The results of these events have been devastating for some of the fauna, with several species of fruit bats having been hit especially hard. The problem has been recognized only recently, and efforts are under way that may help to save the remaining species and their habitats.

The case of Chapman's Bare-backed Fruit Bat is illustrative of many of the problems that confront conservation efforts in the Philippines. Dobsoni chapmani was named only in 1952 by Professor Dioscoro S. Rabor, a Philippine biologist who has since become prominent in the country's conservation movement. Fewer than 35 specimens were collected for study by scientists; most came from Negros Island in the central Philippines, with a single specimen from the adjacent island of Cebu. When the last of these specimens were taken in 1964, the bats were moderately common in several cave systems in the sparsely populated, generally well-forested southern portion of Negros. Since 1981, when we began our studies of the ecology and evolutionary history of the mammals of the central Philippines, we have been unable to find any living animals, and have found only a single mandible on a cave floor in an area that was forested until about 1960. With the assistance of our collaborators at Silliman University in Dumaguete City, Negros Oriental, we have been able to piece together the following scenario of the species' extinction.

Dobsonia chapmani was the only member of the genus that occurred in the Philippines. During the Pleistocene, the time of the great ice ages, the sea level was low and interisland distances were reduced. The bat probably arrived from Indonesia, where its closest relative still lives. Like them, D. chapmani took up residence in limestone caves around the periphery of several islands, roosting near cave entrances in colonies rarely exceeding 300 individuals. When the sea level rose 10,000 years ago, certain caves were flooded, reducing roosting sites, but some caves, and some populations, remained. Each evening the bats flew out over the forest in search of ripe fruit and nectar, often traveling more than 8 miles (15 kilometers).

Expanding human populations began utilizing the forests in the distant past, but significant destruction began only in the late 1800's. Forests were cut for railroad ties road beds, and fuel for the sugar cane transportation system. Increasingly, farmers moved inland in search of more land. By 1970, the last lowland forest on Negros had been invaded and destroyed, eliminating most of the food source near the caves. At the same time, workers removed guano from the caves, disturbing the bats' reproduction, and often killing these largest of the local cave bats to supplement their primary diet of rice and corn. The few specimens taken for museums came from the last period of stability, just before the final phase of deforestation and guano mining. When we visited the caves we found a single bone, and when we netted extensively in the mountain forests where feeding bats were occasionally found in the early 1960s, we found none.
The primary elements of this story are to be found in nearly every case of extinction or endangerment of the Philippine mammal fauna. Destruction of feeding areas, disturbance or destruction of roosting and breeding sites and over-utilization of animals as a food source all play prominent roles, but restriction to geographically small areas and small initial population size may also be common. Moreover, infrequent surveys and limited basic knowledge of the taxonomy and distribution of the fauna contribute to a lack of appreciation of the existing problems.

Nyctimene rabori: A case for hope
In the same forests of southern Negros lives another fruit bat, endangered, but still present as a viable population. The Philippine Tube-nosed Fruit Bat once occurred widely over the island of Negros, but now lives only in the forest fragment of the mountainous portion of southern Negros, and perhaps in the forest fragment around Mt. Canlaon, a volcano in the north. Described only in 1983, Nyctimene rabori is a bat of the primary (undisturbed) rainforest, where it feeds on figs and other fruit of the forest canopy. It has avoided the fate of Dobsonia chapmani, in part, because it roosts in forest trees, not in the more vulnerable caves. Both Mt. Canlaon and a part of the mountainous southern fragment, including the beautiful Twin Lakes Region, are designated by the national government as protected areas. However, deforestation continues to be a threat. In the Twin Lakes area, we estimate a two to three percent deforestation rate per year since we began our ecological studies there in 1981, and collaborators at Silliman University have data that indicate that this is a continuation of past activities. Several observers have suggested to us that Mt. Canlaon faces similar problems.

A strong note of hope for preservation of these forest fragments on Negros Island has been sounded by the national government and international conservation agencies. It recently was recognized that the deer that occurs on Negros, Panay, and several nearby islands is an endemic species— Cervus alfredi, the Visayan spotted or Prince Alfred's deer. This species is severely endangered because of deforestation and overhunting. Officials from the Philippine Bureau of Forest Management and the Jersey Wildlife Preservation Trust have established a captive breeding program for the species, and additional incentive has been added to the perceived need for stronger protection of the remaining forests on Negros. This points out an additional important element of any conservation issue in the Philippines: protection of habitat for one species often protects many others.

Flying foxes: Endangered giants
There are eight species of large flying foxes in the Philippines, six of which are endemic, and all members of the genera Acerodon and Pteropus. The largest of these, Acerodon jubatus and Pteropus vampyrus, historically aggregated in the large camps characteristic of flying foxes, with numbers in one camp on Mindanao estimated to be near 150,000 as late as the 1920's.
Similar roosts were common throughout the Philippines. On Negros in recent years, we often heard them chattering in the giant fig trees in the forest during the evening, but the largest camps we saw or heard of numbered no more than a few hundred individuals. They are hunted heavily for meat, and seem rare or absent outside of natural forest. Their medium-sized relative, Pteropus hypomelanus, feeds on overripe fruit in orchards, as well as in the forest, and so is more successful. The relatively small Pteropus pumilus is still abundant in forest on several islands we have visited. Status of the other species, A. leucotis, A. lucifer, P. leucopterus, and P. speciosus, is largely unknown.

It is not possible to estimate the number of species of bats in the Philippines that are extinct or endangered because information is often very limited. Faunal surveys are needed in nearly all parts of the country. A final case illustrates the need for basic research in the Philippines before conservation issues even can be identified. In 1896, a species of flying fox, Acerodon lucifer, was named from the island of Panay. We know of no record of a specimen having been taken since the original series was obtained in 1888. Since deforestation on Panay has been as severe as on Negros, it can be inferred that the species is in trouble, if not extinct.

The outlook
Although the case-studies here given present a bleak picture, the opportunity for improvement is recognized by both government and private organizations in the Philippines and elsewhere. The Ministry of Natural Resources has established its own conservation programs for several species, notably the Philippine eagle and dwarf water buffalo. It also has collaborated with international and foreign groups on studies of others, such as the Philippine tarsier (Lincoln Park Zoo and Duke University), and the flying lemur (Cornell University). Biologists at the Philippine National Museum, University of the Philippines at Los Banos, and Silliman University have active research programs on terrestrial vertebrates, including bats. A recently expanded conservation society, the Haribon Foundation, is active in education and publicizing conservation issues and needs, as well as providing a base for applied environmental and wildlife programs. However, much remains to be done. Letters to the Chief of the Parks and Wildlife Division, (Mr. Lorenzo C. Agaloos, Bureau of Forest Development, Ben-Lor Building, 1184 Quezon Avenue, Quezon City, Republic of the Philippines), expressing support for their efforts to protect and preserve the unique fauna of the Philippines, including neglected species such as bats, will help to demonstrate international concern. Contributions to the Haribon Foundation (5th floor, Marietta Apts., 1200 Bacobo St., Ermita, Manila) will help keep the issues alive.

(bio)
Lawrence R. Heaney is a Post-doctoral Research Fellow in the Division of Mammals at the National Museum of Natural History, Smithsonian Institution, in Washington, D.C. He has been studying the systematics, zoogeography, and ecology of Southeast Asian mammals for over 15 years. Paul D. Heideman recently received his Ph.D. in ecology at the University of Michigan. He began his studies of bats 10 years ago, and for the last five years has been conducting his dissertation research on the reproductive ecology of fruit bats in the central Philippines. Heaney and Heideman are currently writing a book on the mammals of Negros Island. 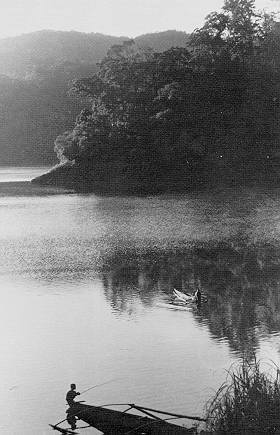 The forest surrounding Lake Balinsasayao, habitat for many of the remaining bats of the Philippines. PHOTO BY PAUL D. HEIDEMAN 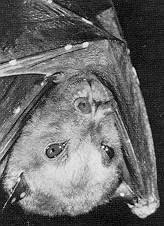 The Philippine Tube-nosed Fruit Bat was first described as a species only in 1983. PHOTO BY PAUL D. HEIDEMAN