“When people see an origami exhibit, they’re immediately captivated and full of questions,” says BCI member Michael G. LaFosse, a world-renowned master of Japanese paper folding. “So when they view my origami bats, the art bridges the gap between fear and confidence, and they aren’t afraid to ask me all about bats.” In 20 years of exhibiting origami animals, LaFosse says he has never heard a single “yuck, bats” type of response from anyone. In fact, he says, most people seem to want to learn as much as they can, and they walk away thinking bats are amazing creatures.

With formal training in biology, LaFosse calls himself a “biologist who interprets natural history studies through art.” Since receiving his first Golden Guide nature book at age five, his favorite creatures have been bats and mollusks. When La Fosse was seven, his father found a grounded bat and brought it home in a box. The bat flew away, but LaFosse senior showed his son the “bat” entry in the family encyclopedias and read him the entire account. After that, LaFosse says he read every bat-related book he could at his local library, then pestered the librarians until they purchased more.

At age 12, he was introduced to origami through an article about the work of Japanese Origami Master Akira Yoshizawa, now a personal friend and mentor. Combining his two interests, LaFosse continually calls upon his understanding of the natural world in creating his origami menagerie. For each project, he tries to observe the animal in the wild or in captivity and also studies preserved specimens, photographs, and videos. For a 1998 exhibit at the Arizona-Sonora Desert Museum, LaFosse spent a month as a resident artist studying the indigenous animals and gathering fibers from desert plants to use in his custom, handmade papers. More than 40,000 people visited his origami display of 25 native animals.

Recently LaFosse’s work was featured in an origami show at the Louvre Museum in Paris. When not exhibiting his folded creations around the world, he can be found at his studio in Haverhill, Massachusetts, teaching classes or working on new designs. He has frequent requests for special advertising designs. One of the more notable was a television commercial several years back for McDonald’s, showing dollar bills being folded into objects such as an aardvark, the Eiffel Tower, and a space shuttle.

Out of a lifelong total of more than 2,000 original designs of plants, animals, insects, and airplanes, LaFosse’s brown bat (left) is one of his favorites. The design took eight years to perfect and requires about 12 hours of folding time. His most popular and famous chiroptera, however, are his stylized “Happy Good-Luck Bats” (below). Dozens of these delicate figures were commissioned by Saks Fifth Avenue in New York City and fashioned into a 30-foot “bat chandelier” for the 1994 New York Asia Society’s Gala Fund Raiser. Most adults or teenagers can fold either of the two designs (roosting or flying) with a little practice, thanks to LaFosse’s step-by-step video (sidebar).

As for other bat designs, LaFosse says he has a few ideas “waiting in the wings,” and is looking forward to the challenge of a species with large ears, such as a pallid, spotted, or big-eared bat. We are pleased to hear there will be more of these unique sculptures in the future, offering the public a most charming and universal introduction to the wonder of bats. 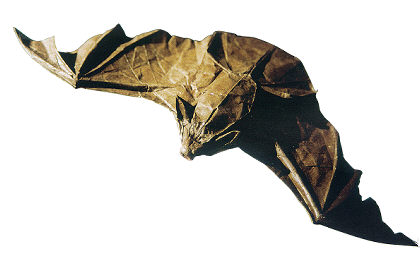 Each of LaFosse’s creations is an entirely original design, created from a single piece of handmade paper. LaFosse’s premier bat design is the big brown bat (Eptesicus fuscus), which took eight years to perfect and requires 12 hours to fold. 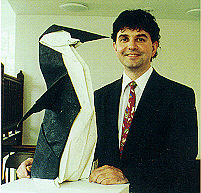 The artist poses with a penguin he created. When possible, LaFosse likes to make life-sized animals. 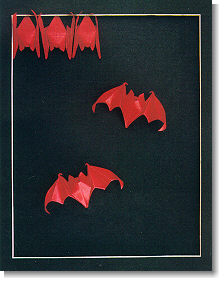 Visitors to the BCI office always enjoy this framed montage of LaFosse’s “Happy Good-Luck Bats,” donated as a gift from the artist. LaFosse has made it possible for anyone to create the bats using his video (see information at right), though it is recommended for individuals or a small group, rather than a classroom setting.