The bat that greeted the first Polynesians may now be disappearing. . .

The ancient Hawaiians called the bat `ope`ape`a as they watched it fly within the `ohi`a-lehua forests on their Pacific islands. The Hawaiian bat was already an inhabitant of this volcanic archipelago when the Polynesian settlers made their way from the south 1,700 years ago. It is the only land mammal native to the islands and is Hawaii's only bat.

Today, even with our greater general knowledge of bats, the life of `ope`ape`a remains little known. One hundred and forty years after it was first sighted by Europeans, our knowledge of ope`ape`a is still so scant that we are not even sure of its identity. Its physical appearance suggests that it is a form of the continental hoary bat and may have arrived in Hawaii from South America. Although we currently recognize three subspecies of the hoary bat (the North American L. cinereus cinereus, the South American L. c. villosissimus, and the Hawaiian L. c. semotus), some studies suggest that the Hawaiian bat may have spent enough time in isolation to have evolved into a separate species.

Most visitors to the islands rarely venture beyond the hotels and beaches of Honolulu, but to those who have spent any time there, the reality of Hawai`i runs much deeper than aloha shirts and surfboards. These cragged, beautiful islands, with their native animals and plants, long isolated from their ancestral mainland homes, are unique. Over the centuries, organisms gradually changed from their original forms to become species found nowhere else in the world. There are other isolated islands with endemic species, but none are as richly endowed with diversity as is Hawai`i. This phenomenon has left biologists with a rare chance to study the evolution of life absent of many of the pressures faced in more complex continental habitats. With this opportunity, however, has come responsibility. Most of the native animals and plants of Hawai`i, including bats, face uncertain futures in the face of continued urban and agricultural development. Hawai`i has already lost almost three-quarters of its original bird fauna, and over one-third of its native plants are now endangered.

As a precaution, the Hawaiian bat was declared an endangered species by the U.S. Fish and Wildlife Service in 1970, but we actually know very little of its population numbers or yearly trends. Without this supporting information, much of the Hawaiian public has become suspicious of the concept of endangered species, and it is imperative to assure them that such actions are justified. As part of the task of providing this data, Dr. Quentin Tomich of the island of Hawai`i has kept careful records of sightings of `ope`ape`a. Although Hawaiian bats are often seen in groups over harbors and forests on Kaua`i, O`ahu, Maui, and Hawai`i, we cannot be sure that these observations indicate that they exist in high enough numbers to ensure their survival.

Dr. Robert Barclay's studies in western Canada indicate that the hoary bat is a forest species that hunts over open areas and roosts alone. `ope`ape`a's fondness for the islands' native forests could be a trait retained from forest-dwelling continental ancestors. During my studies of their distribution on Kaua`i, the oldest island, I located only two sites where bats could be reliably seen from night to night. Both areas are connected to the island's native forests. The surveys were conducted during both the summer dry season and the winter wet season, with all sites sampled at least twice. I located the bats using "bat detectors," small devices that pick up and amplify ultrasonic echolocation signals, thereby eliminating the need to capture the bats.

While searching for `ope`ape`a in the forests and fields of Kaua`i, I rarely detected them over farmlands or within towns. My surveys suggest it is an uncommon bat found primarily in open, wet areas near forests and only occasionally within drier areas, even when flying insects are abundant. The occurrence of the bat near river mouths on the wooded north coast of Kaua`i may indicate that such rivers act as conduits to roost sites deep within the forest. The bats were rarely detected along similar-size rivers on the southern coast where there are no forests. It appears that the species' ability to tolerate the activities of people depends upon how much of their forests we are willing to leave intact. Unlike the North American Little brown bat (Myotis lucifugus), `ope`ape`a seems unwilling to exploit our structures and is therefore dependent upon undisturbed forests.

Because of their dependence on these forests, Hawaiian bats could serve as an important indicator species, providing us with information about the general health of the forests and other creatures within it. As the trees fall to hotels, sugar cane fields, water reservoirs, and cattle ranches, so do the species that depend upon undisturbed forests. If `ope`ape`a depends upon forests to raise young, then the death of the woods will surely seal their fate.

Much more remains to be learned about the hunting behavior of Hawaiian bats and their relationship with other Hawaiian life. Quentin Tomich and John Whitaker's study on the food preferences of the species indicates that `ope`ape`a consumes a broad range of insects, including many beetles. The Hawaiian bat feeds not only on native insects but on introduced species as well, many of which are considered pests, such as the sugar cane leafhopper. Evidence suggests that these bats may also feed on the highly destructive damp wood termite, an evening swarming species. In another study by Jacqueline Belwood and myself, it was revealed that this bat consumed primarily moths.

So little is known about the needs of Hawaiian bats that we may be witnessing their extinction without even realizing it. To help them, we must know what their year-to-year numbers are and whether they are declining. We must also determine what, if any, long-term effects pesticides and pollutants may be having on them. And we need to know more about their interisland movements and their basic natural history. Sadly, one thing we do know is that `ope`ape`a's habitat is disappearing through continued and accelerating deforestation.

`Ope`ape`a will not, like the thunderous clap of a whale's fluke, loudly announce its impending extinction. While we quibble about whether the Hawaiian bat is or is not technically endangered, this elusive animal may quietly disappear. As the Hawaiian people struggle to keep alive their language and history, we must also endeavor to protect the hidden treasures of that heritage and ensure that the bat that greeted the early Polynesians continues its life in the protected forests of these fragile islands.

(Bio)
James H. Fullard is an Associate Professor of Zoology at the Erindale College of the University of Toronto in Ontario, Canada. 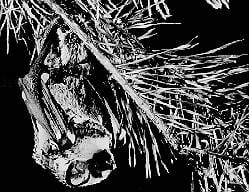 The Hawaiian bat is smaller than its continental cousin, the hoary bat, shown in this photo. Some studies suggest that it may have spent enough time in isolation to have evolved into a separate species. PHOTO BY MERLIN D. TUTTLE