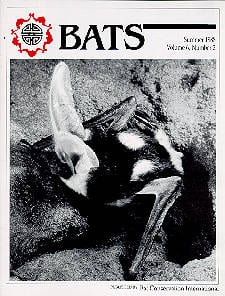 The Spotted bat (Euderma maculatum) is one of the rarest and most beautiful mammals of North America, ranging from Mexico to western Canada. Its long, silky fur is snow white beneath and jet black above, dramatically accentuated by large white spots on its shoulders and rump. Its translucent pink ears, nearly as long as its body, are the largest of any bat found in the United States, and it has pink wings to match!

When this elusive animal can be found, it is mostly encountered in arid areas of the southwestern U.S., apparently preferring cliff face roosts near water holes. Little is known of its behavior and habits, but it appears to feed mostly on moths, which it captures high above the ground. It is one of the few bats that uses echolocation frequencies low enough to be audible to humans.

From its first scientific discovery in 1891 until 1965, only 35 specimens were known to science. Even now, it is one of America’s least known animals, but the rarity with which it is observed likely does not reflect its true status in nature. Its habits and choice of roosting sites make the Spotted bat difficult to observe and unlikely to be harmed by humans, except for over-collecting for museum specimens at some of its favorite water holes.