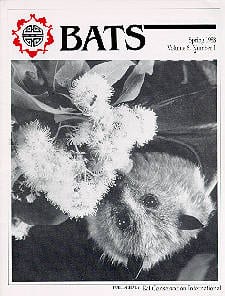 A Grey-headed flying fox (Pteropus poliocephalus) peers out from behind the blossoms of a rough-leafed apple tree (Angophora subvalutina). This large bat with a wingspan of three to four feet is found only on the tropical eastern coast of Australia where it is one of the primary pollinators of a variety of Eucalyptus and other important hardwood trees. Unlike insectivorous bats, flying foxes do not echolocate, but instead rely on sight and odor to locate food. In large “camps”, communication between Grey-headed flying foxes can be quite noisy, and more than 20 different calls have been identified, each evoking a corresponding behavioral response. Despite the vital role of flying foxes in forest regeneration, many populations are rapidly declining throughout much of their range in the Old World tropics.