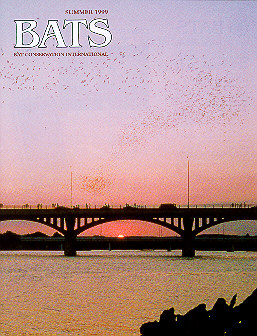 In 1980, when about 1.5 million Mexican free-tailed bats (Tadarida brasiliensis) began moving into Austin’s Congress Avenue bridge in central Texas, news stories appeared nationally claiming that hundreds of thousands of rabid bats were invading and attacking citizens. Dire public health warnings quickly followed but were proven unfounded. With BCI’s help, Austinites soon learned to appreciate and protect the bridge colony as a unique asset. From March through October each year, the bats are a vital part of the city’s economy as they attract tens of thousands of tourists and consume up to 15 tons of insects a night, including many of the area’s most costly pests.