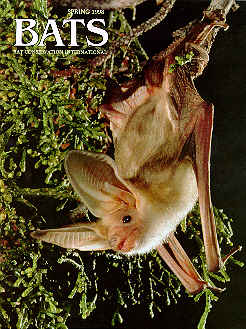 The pallid bat (Antrozous pallidus) is known for its unique habit of feeding almost entirely from the ground. Unlike most other North American bats, this species captures little, if any, prey while in flight. With its huge ears, it can detect insects simply by listening for footsteps, and it can respond accurately to a split-second sound from up to 16 feet away.

After swooping down upon its prey, the pallid bat carries the insect to a convenient perch to consume its meal. Its most common prey include crickets, beetles, grasshoppers, and even scorpions (see story, page 12). The pallid bat is actually immune to a scorpion’s sting!

Pallid bats roost in rock crevices, buildings, and bridges in arid regions. They are found from Mexico and the southwestern United States north through Oregon, Washington, and western Canada.