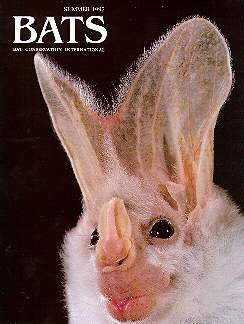 The Australian ghost bat (Macroderma gigas) is one of the largest of all microbats. It is the only carnivorous bat in Australia and is included among a number of species referred to as “false vampire bats” (see story, page 11). It perches in vegetation, darting down to catch small mammals and reptiles, killing them with a quick bite, then carrying them to a safe perch for eating. It also captures small, sleeping birds, probably learning the locations of important roosts.

Ghost bats live in northern Australia and New Guinea in diverse habitats from arid expanses to lush rain forests. One of the largest known colonies inhabits a gold mine adit, and they are also known to roost in caves and crevices. They are secretive and rare, but often an accumulation of remains from their prey will distinctly mark a roost.