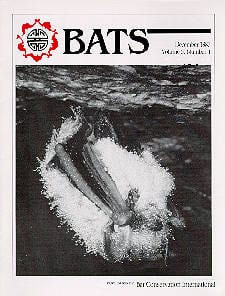 Found throughout much of the eastern United States, an Eastern Pipistrelle (Pipistrellus subflavus) hibernates in a Kentucky cave. Unlike some other North American species who cluster in dense groups, these bats prefer to hibernate individually, usually in several different spots within a cave. An individual can remain in a single position for weeks, collecting beads of moisture condensation on its fur, which indicates that its body temperature has dropped to that of the humid surroundings of the cave. It may occupy the same precise spots from winter to winter.
Bats are quite plump when they enter hibernation. This reserve of fat must last them through the winter, and different species space their periodic natural arousal accordingly. Biologists believe that bats arouse themselves to eliminate excess waste products, which are toxic to tissues.
Careless human entry into a hibernation cave can cause bats to awaken prematurely, and they can expend anywhere from 10 to 30 days worth of fat reserves as a result of the intrusion. Repeated disturbance causes thousands of hibernating bats to starve to death before spring each year, a primary cause of population decline. The problem can be greatly reduced through education. Since bats rarely need the same caves year round, cavers can plan their visits to avoid bat hibernation caves in winter and nursery caves in summer. Photo by Merlin D. Tuttle