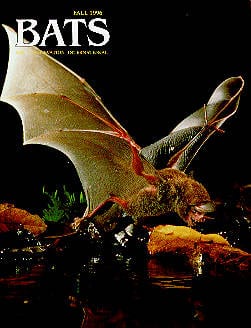 The frog-eating bat (Trachops cirrhosus) is just one of the exotic bats that we are likely to see on our 1997 members trip to Peru. This species belongs to a small group of bats known as “foliage gleaners"— bats that feed on stationary prey plucked from the ground or foliage. They locate frogs and can even distinguish between poisonous and edible species by listening to the frogs’ mating calls. Research has shown that they rely so heavily on sound to find their prey, they will come to tape recorders playing the mating calls of frogs. In addition to frogs, these bats prey on insects and lizards. Frog-eating bats range from southern Mexico through Brazil, including the island of Trinidad.