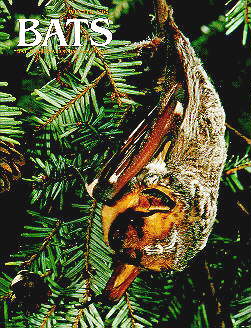 The hoary bat (Lasiurus cinereus) derives its name from its distinctive white tipped fur, which has the appearance of hoar frost. Humans rarely get the chance to see these magnificent bats; they are not attracted to houses or other human structures, and they stay well-hidden in foliage throughout the day. They typically roost 10-15 feet up in trees along forest borders.

In the summer, hoary bats don’t emerge to feed until after dark, but during migration, they may be seen soon after sundown. They sometimes make round trips of up to 24 miles on the first foraging flight of the night, then make several shorter trips, returning to the day roost about an hour before sunrise.