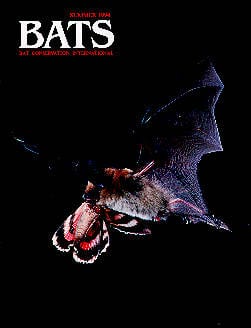 The relatively long black ears of the long–eared myotis (Myotis evotis) are distinctive and dramatic in contrast with its paler body fur. These are western bats, predominately found in coniferous forests, often at higher elevations. Although overall, little is known about them, studies indicate that their feeding behavior is somewhat flexible, since they have an ability to capture airborne insects as well as to glean prey from vegetation or the ground. Their main diet appears to consist of moths, and the type of echolocation they use when hunting makes them well adapted to hunting in forested habitats.

Long-eared bats were among the nine species studied last summer in Arizona’s Coconino National Forest [page 4]. The project gave researchers some of their first clues into where these bats roost and give birth to their young.
Photo by Merlin D. Tuttle