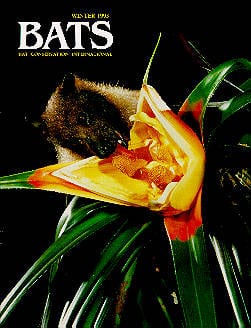 Mariana fruit bats (Pteropus mariannus) are the last flying foxes on the island of Guam, and they too are endangered. This one is eagerly feeding on the pollen of a Freycinetia inflorescence (Freycinetia reinecki), a liana plant heavily dependent upon flying fox pollination. The plant in turn rewards the bats with fleshy, edible bracts as well as copious amounts of highly nutritious pollen containing 18 amino acids. Unlike many flowers, these produce no nectar. Pollen is carried from flower to flower on the bat’s fur.

As many as 40 percent of the tree species on Guam rely on these bats for pollination or seed dispersal. The one remaining colony has been protected for many years on lands occupied by an American air force base, now proposed as a national wildlife refuge (see story, page 14).
Photo by Merlin D. Tuttle