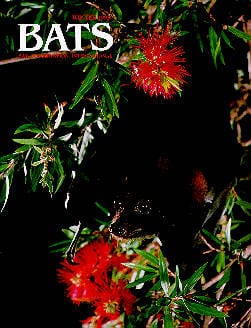 The black flying fox (Pteropus alecto) is Australia’s largest bat with a wingspan of about four to five feet. These magnificent animals are found roosting in large “camps” high in the dense leaf-cover of the hot coastal mangroves in the north. Their preferred food includes the blossoms of eucalypts, paperbarks, turpentines, and other trees. Here, a young black flying fox is shown lapping the sweet nectar from a red bottle-brush flower.

Thousands of flying foxes depart the mangrove swamps at dusk, traveling 30 miles or more in search of dinner. When their natural diet is unavailable due to drought or other factors, they sometimes will enter cultivated fruit orchards. Still unprotected in much of their range, they are often killed in large numbers by fruit growers.

Females typically give birth to a single young in October, which they carry with them for up to a month. Thereafter, the young are increasingly left behind at night. It is often about three months before they can go out on their own. — Photo by Merlin D. Tuttle