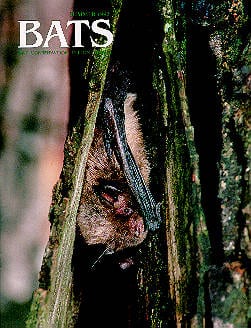 Indiana bats (Myotis sodalis) are mostly known from their winter hibernation roosts in caves and mines. Until recently biologists only speculated on where they went in summer. Studies now indicate that in summer these endangered bats roost and rear their young under loose bark or in tree hollows, often returning to the same tree year after year. As is true for many bats that use forests, mature trees are favored (story, page 4), both because they provide roost sites and also because Indiana bats often forage around the crowns of large trees. Despite protection, Indiana bats continue to decline in several parts of their range, though some populations in protected caves and mines are now stable or increasing in size. They were one of the first bat species in the United States to be recognized as endangered.
Photo by Merlin D. Tuttle