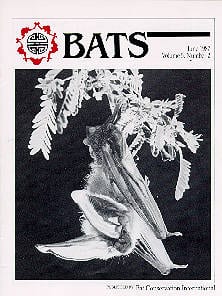 Townsend’s Big-eared Bats (Plecotus townsendii) range primarily from southern Mexico through the western United States, but they are also found in limited areas in the East. The most typical habitat is arid western desert scrub and pine forest regions.

These bats are extremely sensitive to disturbance at their roosting sites, mostly in caves. Dr. Elizabeth Pierson has recently begun a two-year study to determine their status in California. It is the first bat study funded by the California Department of Fish and Game. Mark Perkins received a grant to complete his survey of these bats in Oregon (see BATS, February 1985). He estimates that fewer than 3,000 individuals are left in Oregon and 2,000 or less in Washington. Both researchers are BCI members.