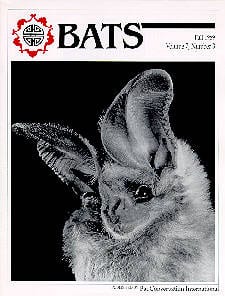 California leaf-nosed bats (Macrotus californicus) are among the group of bats known as foliage gleaners. Most insect-eating bats catch their prey in flight, but foliage gleaners pluck their meals either from the ground or from bushes. This species is found only in northwestern Mexico and the extreme southwestern United States. In the United States, they are primarily found in mine tunnels along the Colorado River, where they are very vulnerable to human disturbance. California leaf-nosed bats were recently added to the candidate list of species to be proposed for endangered or threatened status. They do not hibernate or migrate.

These bats were recently filmed in the Mexican Sonoran Desert catching crickets for a new wildlife film special about bats and the work of BCI (see page 15). Photo by Merlin D. Tuttle