Through intensive educational efforts, thousands of mine-land managers across the country are being motivated to protect bats that roost in mines . . .

MILESTONE FOR North America’s bats was achieved early this year with the completion of BCI’s Bats and Mines resource publication. This comprehensive handbook is the newest educational tool of the North American Bats and Mines Project, an effort
jointly funded by BCI and the U.S. Bureau of Land Management (BLM). In addition to explaining the value of bats and the importance of abandoned mines as roosts, the handbook offers the most current and complete information available on mine-assessment tec
hniques and closure methods that protect both bats and people. The BLM and five other federal agencies have already distributed a total of 9,000 copies to their regional offices throughout the United States, and copies will soon be in use in several other
countries, including Canada and Mexico.

The response has been enthusiastic. Robert Bump, a natural resource specialist from Montana, wrote: “I work for a federal agency and routinely reclaim mining sites in Montana. I am ashamed to say I have closed off many old mining adits [openings] witho
ut a thought for bats. Bears, yes. Bats, no. After reading this publication, I intend to change our method of portal [entrance] and adit closure. From now on we will consider assessment and modification of mine grates to allow bats to use potential mine h
abitat. I am doing several closures this summer and all will now have ‘bat grates’ installed.”

Bump added that he is also interested in learning about bats native to Montana. Many Bats and Mines recipients have never before read about the importance of bats. Once they begin to learn, their curiosity often expands to broader bat conservati
on issues. In fact, convincing officials that bats are valuable and worthy of protection is seldom a problem; the real challenge is simply to make them aware that bats are in danger and to train the appropriate personnel in conservation techniques— a
n enormous task in itself.

Regional workshops have proven to be one of our most effective ways to approach this task. Participants learn gating techniques and how to assess mines for the presence of bats. More importantly, they have the opportunity to meet colleagues who face co
mmon problems, an interaction that often leads to the development of cooperative solutions.

After attending last fall’s Great Lakes mine-assessment workshop [BATS, Winter 1994], Walt Summers, a district conservationist for the Natural Resources Conservation Service, brought together fellow participants in an ambitious project to survey
mines in Michigan’s Upper Peninsula-a project the Environmental Protection Agency (EPA) recently deemed worthy of a $50,000 grant. BCI, federal and state agencies, and a local association will all work together to assess Michigan’s mines for bats and to
protect those we find. A portion of the EPA funds will also be spent to erect a bat gate at the abandoned Cyclops Mine, a critical hibernation site for nearly 70,000 bats.

Another BCI workshop graduate, Bobbie Scott of Washington State, was responsible for the protection of two abandoned mines this spring. Bobbie alerted us in March when she discovered that demolition was slated for a mine on state park land that she kne
w had resident bats. We quickly contacted Cleveland Pinnix, the director of the Washington State Parks and Recreation
Commission who was surprised to learn that bats were roosting in the mine. Pinnix not only called off the scheduled demolition but also had the state environmental program manager assess other possible bat roost sites across the state. The plans for d
emolition have now been replaced with plans for bat-compatible gate closures at both the site that Bobbie originally reported and at another state park.

With such remarkable initiative from our workshop graduates, we have wasted no time in scheduling more sessions for 1995 and early ’96. Supported by more than 18 agency and industry cosponsors, BCI and the Bureau of Land Management have made plans for
at least seven more workshops at sites across the country, including Nevada, Virginia, Wyoming, Montana, Maryland, and Idaho.

We are also keeping an active conference schedule. Early this summer, Merlin Tuttle will address hundreds of mine-land managers from around the world at the “Sudbury ’95 Conference on Mining and the Environment” in Ontario, Canada-an opportunity that s
hould make a real difference for bats. This spring we took a special Bats and Mines exhibit to four conferences, each aimed at a different group of mine-related professionals, such as wildlife biologists, mining industry executives, and federal and state
agency officials.

Through lectures and exhibits, regional workshops, and distribution of
the Bats and Mines resource publication, we are saving many of
North America’s most important bat populations. However, inadvertent killing of bats during mine safety closure
s remains an enormous threat. We are currently raising funds needed to expand the project and to distribute Bats and Mines to state agencies, mining companies, and private land owners. We also must expand training, field evaluation, and support for
protective efforts. Even on federal lands, many site managers are largely unaware of how to address unique situations. And the countless bats living in mines on private lands are still at extreme risk because many land owners are unaware of their presenc
e, values, or needs. The vigilance of BCI members in reporting pending mine closures continues to be one of the most important contributions to the defense of mine-roosting bats. 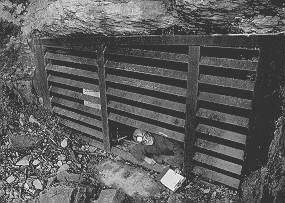 In just its first year, BCI’s bats and mines project has dramatically increased awareness of the problem of closing abandoned mines before they are assessed for bats. Special bat gates at entr
ances address public
safety, are often more cost-effective than traditional closure methods, and allow bats to continue using mines. 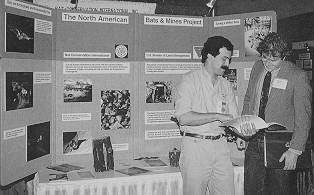 BCI staff are traveling to conferences around the country and providing special exhibits and lectures as part of the project’s mission to educate agencies and private industry about the importance of mines as bat habitat. Proje
ct director
Dan Taylor (left) talks with Doug Ward, a mining engineer with the U.S. Bureau of Mines.