New Zealand consists of two large and many smaller islands in the Southwest Pacific Ocean, lying between the subtropics and the subantarctic, some 2000 kilometers southeast of Australia. Because it has been isolated from other lands for over 80 million years, New Zealand has preserved an ancient and unique fauna and flora, including the tuatara, last of the extinct Rhynchocephalian reptiles, the flightless kiwis, and extinct moas. Bats are the country's only native land mammals, all others introduced by man.

A Small Unique Bat Fauna
There are only three bat species in New Zealand. The Long-tailed Bat (Chalinolobus tuberculatus), which came from Australia during the Pleistocene, is widespread and relatively common. The other two species are both Short-tailed Bats of the endemic family Mystacinidae, which is now believed to have come from South America millions of years ago. One is probably extinct, the other is endangered.

The two mystacinid bats, named the Greater (Mystacina robusta) and Lesser (M. tuberculate) Short-tailed Bats, are the most terrestrial of all the 950 or so bat species in the world. They spend much time at night running up tree trunks and along branches or burrowing in the leaf-litter and humus on the forest floor searching for food. They also burrow into rotten logs and trees to excavate their own roosts or use seabird burrows as both roosts and feeding sites. This "un-batlike" behavior is possible because they have a unique method of folding their delicate wings to protect them from injury. They are able to walk on their robust hind legs and feet, using their fore arms as front legs. Their fur is short and velvet-like, similar to that of moles and shrews. This terrestrial behavior probably evolved over millions of years because of the complete absence of mammalian predators. Many species of New Zealand birds have either become weak fliers or are completely flightless for the same reason. It is easy to see how short-tailed bats and many species of birds are such vulnerable prey for introduced predators.

Polynesians Arrive with First Mammal Predators
The decline of much of New Zealand's highly endemic vertebrate and invertebrate fauna began with the arrival of the Polynesian Maori about 1000 years ago. These first New Zealanders brought the Polynesian Rat (Rattus exulans), which spread over the country and was the only mammalian predator apart from man for about 800 years. The serious effects of predation by this rat on Greater Short-tailed Bats, ground-nesting birds, lizards and large ground insects, have only recently been realized. The Greater Short-tailed Bat was once (probably several hundred years ago) widely distributed over the North and South Islands and on several offshore islands. By the time European settlers arrived in New Zealand with other species of mammal predators in the early 1800s, this bat was already extinct over 98% of its former range and only survived on two small rat-free islands off Stewart Islands. The Lesser Short-tailed Bat, however, was not as badly affected. Perhaps being smaller it was more agile and not so easily caught, or it may have spent less time on the forest floor than its larger relative.

Arrival of Europeans
The arrival of European settlers about 140 years ago, greatly accelerated the decline of New Zealand's fauna and flora. The greatest impact has been the destruction of about 66% of the lowland forest (80% in the North Island, 55% in the South, Island) for farms, towns, cities and exotic pine plantations. This has seriously depleted much of the native forest fauna, particularly bats and birds.

A more insidious and less visible result of European settlement has been the continual effects of predation by a host of imported predators, including Ship Rats (Rattus rattus) and Norway Rats (Rattus norvegicus), stoats, ferrets and weasels (imported to kill rabbits), and feral cats. For both species of short-tailed bats and for ground-nesting birds, the effects of predation by Ship Rats or stoats have been catastrophic.

A tragic example of what must have happened in many forests last century is the story of the 1960s plague of Ship Rats on Big South Cape Island and Solomon island, the last remaining sanctuaries for the Greater Short-tailed Bat. In 1962, Ship Rats were accidentally introduced to these previously rat-free islands. By 1965 the bats and most of the endemic birds there had become extinct. No Greater Short-tailed Bats have been seen on these islands or elsewhere since then, completing the extinction of a bat which was eliminated from the rest of New Zealand by the Polynesian Rat several hundred years ago. If a few of these bats have survived undetected in the presence of Ship Rats on Big South Cape Island, or on the adjacent rugged coastline off southwest Stewart island with Polynesian, Norway and Ship Rats and feral cats, their chances
of continued survival must be very low indeed, and they must be regarded as highly endangered. Expeditions to search for the Greater Short-tailed Bat would be both difficult and expensive; the only reliable way of reaching these isolated and windswept areas off southwest Stewart Island is by helicopter.

Other Possible Dangers
Despite the continued activity of a host of predators, the Lesser Short-tailed Bat still survives in a few lowland forests in the North Island, in only one area of the South Island, and on one small forested island off northwest Stewart Island. This species is included in the Red Data Book of New Zealand as "vulnerable" to "endangered." However, other potential dangers are present for these bats. The Australian Brushtail Possum (Trichosurus vulpecula) was widely introduced last century to start a fur industry. Today, possums are widely distributed in both exotic and native forests and are a major pest of forests and farm crops. The usual methods of killing possums for their skins are with jawed gin-traps or with cyanide poison, often lured with fruit essences to mask the poison. Since the Lesser Short-tailed Bat spends much time on the forest floor, eating forest fruits as well as insects, the laying of fruitlured cyanide baits on the forest floor and on tree trunks is an unknown hazard. To date, only one Lesser Short-tailed Bat is known to have been killed by cyanide intended for possums, but it is possible that it has occurred many times and gone unreported. About three million possum skins are exported each year, which gives some idea of the scale of the industry.

Greater Public Education Needed
The Nature Conservation movement in New Zealand is strong and growing each year. Many New Zealanders are aware of, and concerned for, the plight of our endangered birds and the consequences for wildlife of any further loss of habitats such as native lowland forest and wetlands. However, because bats are nocturnal and rarely seen, few New Zealanders are even aware that their country possesses a bat fauna. It is generally not realized that these three species are the only native mammals, or that one is probably extinct and another endangered. The plight of New Zealand's unique burrowing bats must receive much more attention if surviving populations are to be assured a future.

(Mike Daniel joined the Ecology Division of the Department of Scientific and Industrial Research in Lower Hutt, New Zealand in 1966. For the past ten years he has studied the distribution, ecology and conservation of New Zealand's endangered bats.) 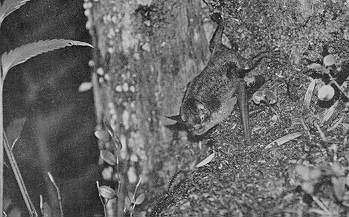 A Lesser Short-tailed Bat about to enter its burrow. Photo courtesy Mike Daniel. 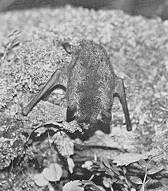