Wildlife Biologist Bruce Thomson, with the Queensland Parks and Wildlife Services in Australia, has accepted an appointment to BCI’s Scientific Advisory Board. As president of the Australasian Bat Society, Thomson will work with advisory board members Les Hall and Greg Richards, and will help coordinate BCI’s assistance with Australia’s conservation needs, including monitoring efforts on behalf of the country’s grey-headed flying foxes.

In China, former student scholar Dr. Ya-Fu Lee serves as a scientific advisor from his position with the Institute of Zoology, Academia Sinica, in Taipei; and in India, BCI is pleased to work with Dr. Shahroukh Mistry from Grinnell College’s department of biology. 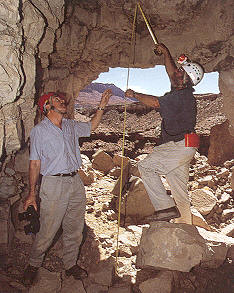 New scientific advisor Bruce Thomson (left) recently toured the United States and plans to implement mine conservation in Australia. Here, he assists John Burghardt (right) with the National Park Service, who records the dimensions of the entrance of Utah’s Whirlwind Mine.