Studies in Mexico’s central valley shed new light on the interdependence of bats and plants . . .

MOST PEOPLE WHO are knowledgeable about bats know that, around the world, different bat species play important roles in fruit and seed production. In Mexico, our region of study, the agave plant’s reliance on bats is often touted because we could not enjoy the popular drinks tequila and mezcal without this essential cactus species. But many lesser-known yet equally important plants of the Mexican deserts also depend on bats to reproduce.

One such group of plants, the Mexican columnar cacti (Pachycereeae), constitutes a dominant form of vegetation over large portions of the Southwestern United States and parts of Mexico. Columnar cacti form forests that cover several square miles with densities of 450 to 750 individual adult plants per acre. Seventy species occur in Mexico, and the richest diversity, almost 45 species, is found in the central portion of the country, including the Tehuacán Valley (in the Mexican State of Puebla) and the Balsas River Basin. This zone has a significant number of native species and also has the highest reported density of columnar cacti: over 700 plants per acre, with as many as 12 different species coexisting.

North America’s nectar-feeding bats have a strikingly similar geographic distribution, with the highest number of species for both bats and cacti in the same areas: the Balsas Basin and the Tehuacán Valley. At these locations, the most abundant nectar bats are the lesser long-nosed bat (Leptonycteris curasoae), the greater long-nosed bat (L. nivalis), and the Mexican long-tongued bat (Choeronycteris mexicana). Apparently due to the extraordinary plant diversity of the region, all three species are present year-round, unlike the migratory populations that enter the southwestern U.S. each spring.

Because of the diversity of native cactus species in the Tehuacán Valley, our research team chose this region as the site for a study aimed at understanding the importance of bats to pollination, seed production, and seed dispersal. Pollination is the means by which a plant transfers its pollen to another plant, most often relying on assistance from animals, such as bats. Flowers are a plant’s way of making itself attractive to animal pollinators. Once pollination enables seeds to be formed within the protective fleshy part of the flower, that part of the flower becomes fruit. The fruit serves to attract animals once again, which, after eating the seeds, drop or pass them in a different location where they can germinate and grow.

The flowers of columnar cacti have many unique adaptations for attracting pollinators such as bees, hummingbirds, hawkmoths, and bats. However, our studies show that some flowers have attributes specifically for attracting bats: they bloom at night and emit a unique and strong odor; they are bowl-shaped and large-mouthed, whitish in color, and uncommonly sturdy; they provide extra large quantities of nectar and pollen; and they contain many anthers, or extra-large anthers, to hold the pollen. Approximately two-thirds of Mexico’s 70 columnar cactus species produce flowers with these characteristics.

We studied several of these cacti through the flowering seasons of 1992 and 1993, concentrating on the branched columnar cactus tetecho (Neobauxbaumia tetetzo). This dominant species ranges over approximately 150 square miles of central Mexico. The plants undergo a mass flowering period in late April, with up to 60 percent of all the fertile individuals (taller than six feet) blooming. The long, white flowers open at sunset and remain open until mid-morning the next day. Copious amounts of nectar are produced, especially in the early hours of the night. The bats are more abundant during this time, when it is possible to catch up to 10 individuals in just one hour. In the first year, we noted that the flowers were visited by three species of bats, two of them regarded as specializing in nectar and pollen (the lesser long-nosed and Mexican long-tongued bats). The third was the Jamaican fruit-eating bat (Artibeus jamaicensis). In the second year of study, an additional nectar and pollen specialist, the greater long-nosed bat, was also observed.

Our experiment with tetecho involved almost 100 flowers, which we allowed to be pollinated under four different conditions: (1) by nocturnal visitors only, (2) by diurnal (daytime) pollinators only, (3) by no animals at all (self-pollination), and (4) by human hand, using the pollen of a neighbor plant (outcross hand-pollination). In addition, we had "control" flowers which we did not manipulate at all.

We were able to control the pollinator visitations by enclosing different floral buds in mosquito net bags at different times. When buds opened, we climbed a ladder propped against the cactus and removed the bags either by night or by day, or left the bag permanently in place to test self-pollination. This procedure went on for a number of weeks, allowing time for pollination to occur and seeds to be formed. About a month later, we collected the fruits produced and counted the seeds per fruit.

The results were amazing. Our experiment demonstrated not only that this species of cactus cannot produce fruit in the absence of visitors, but also that the only flowers to produce fruits are those visited by nighttime pollinators. Diurnal visitors such as hummingbirds proved to be nectar robbers, as the flowers produced no seeds when left open to their visits. Thus for tetecho, the alliance with bats is essential for the production of seeds. This relationship can be viewed as a "keystone" process–one that is crucial to the conservation and management of one of the dominant columnar cacti of the Tehuacán Valley.

Near the zones dominated by tetecho, another columnar cactus, Cephalocereus hoppenstedtii, sometimes known as viejo, forms similar forests. These two plant species almost never occur as co-dominants of an area; however, they bloom almost simultaneously, have similar flowers, and share the same flower visitors. Pollen samples collected from bats, especially from the face and the head, indicate that the bats visit both plant species because pollen from both plants is often found on the same bat. Viejo, just as tetecho, cannot produce seeds in the absence of nocturnal visitors.

Nearby areas are dominated by other species of columnar cacti. To the west of the Tehuacán Valley, one unbranched columnar species, N. mezcalaensis, and another branched species, N. macrocephala, form mixed succulent forests with densities of up to 700 mature individuals per acre. Those species also flower in late April, producing long-tubed, night-blooming, white flowers with copious nectar and a characteristic bat-attracting odor. Neither species can produce seeds in the absence of animal pollinators, and both are pollinated mainly by nocturnal bats. N. mezcalaensis, however, can also be pollinated by daytime visitors such as birds and insects.

Other kinds of columnar cacti from the valley, such as Stenocereus weberii, Stenocereus pruinosus, and Mitrocereus fulviceps, are also pollinated by bats. The flowering season of many of these species is concentrated between late April and July. Later in the year, bats consume the cactus fruits, whose colors and odors resemble that of the flowers they came from. Fruiting season ends in late September, and bats disappear during the winter, possibly going to zones in the valley covered by tropical deciduous forest. A study is currently underway that will examine this possibility.

In another related and ongoing study, we are seeking to understand the relationship between columnar cacti and fruit-eating animals. We know that for some cactus species, such as tetecho, the fruits are eaten and the seeds dispersed by a wide array of animals, including bats, birds, small rodents, and ants. We also know that researchers studying tetecho in years past have concluded that the survival of young plants of this species relies upon interaction with a "nurse" shrub, a plant that provides a protective canopy for a new cactus. We are, therefore, researching the role and importance of each group of animals in the dispersion of seeds to safe places beneath nurse plants. Bats appear to be important seed dispersers because they rest beneath the canopies of trees and shrubs, where seeds can fall into protected areas suitable for germination and survival. Furthermore, bats may drop seeds while in flight, sometimes at distances far from the parent plant.

The key role of bats as pollinators and seed dispersers in this plant community is obvious. If bats were to disappear from the Tehuacán Valley, a large number of columnar cactus plants such as tetecho and viejo would not produce seeds and their populations would decline, possibly to extinction.

The identification of biological co-dependence between species such as nectivorous bats and columnar cacti is of great importance to ecosystem management planning. Nearly 60 percent of Mexico is covered by arid and semiarid lands that historically have been considered useless. Today, increased knowledge about such places is essential to maintaining biodiversity found nowhere else in the world. Although the Tehuacán Valley has been occupied by humans since prehistoric times, this center of endemism and diversity for columnar cacti is now susceptible to the increased activities and pressures of modern life.

Our team is working to create a management and conservation plan for the area, which will be supervised by the National University in conjunction with government agencies and local residents. We are collaborating with researchers from other institutes of the University, such as Dr. Patricia Dávila and Dr. José Luis Villaseñor, as well as with the Mexican government. Through these efforts we hope to ensure the survival of Mexico’s unique bat-and-cactus connection. 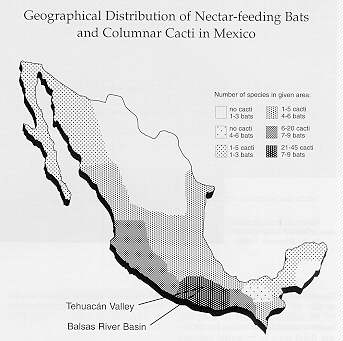 Geographical Distribution of Nectar-feeding Bats and Columnar Cacti in Mexico 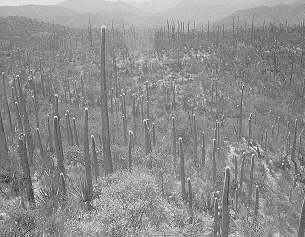 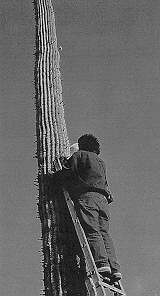 Alfonso Valiente-Banuet climbs up a tetecho cactus to enclose one of the flowers with mosquito netting. 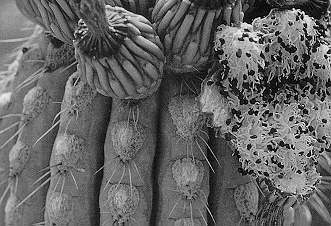 The fruits of this tetecho cactus have burst open and exposed the seeds, many of which will be dispersed to new locations by lesser and greater long-nosed bats and Mexican long-tongued bats.