An impressive new book increases the momentum for bat conservation in Mexico . . . 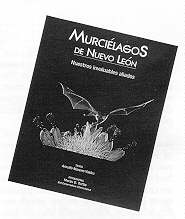 The 400-year anniversary of the founding of Monterrey, Mexico, couldn’t have come at a better time for BCI. Among the celebratory events of 1996 was the publication of a new book vital to BCI’s current educational work in that region. Titled Murciélagos de Nuevo León (“Bats of Nuevo León”), the book was one of several anniversary publications released last year that focus on animals, plants, or cultural features of the northern Mexican state of Nuevo León, where Monterrey is the capital.

BCI trustee Eugenio Clariond not only produced the book, but also arranged for a gala debut through his company, Grupo IMSA. On December 18th of last year, Grupo IMSA formally presented Murciélagos de Nuevo León to the Mexican press and public with a conference and reception at the University of Monterrey’s Biblioteca Central Magna. The highlight of the celebration came when Lorenzo Rosenzweig, the Executive Director of the newly established Mexican Nature Conservation Fund, announced that his foundation had recently decided to make bat conservation a top priority. To demonstrate their commitment, they awarded a three-year, 1,600,000-peso (approximately $228,000) grant to BCI’s Programa Para la Conservación de Murciélagos Migratorios (PCMM) to further our research, education, and conservation initiatives in Mexico.

Plans are underway for a second-edition printing of Murciélagos de Nuevo León in softcover, which will be packaged with BCI’s other Spanish-language educational materials and distributed to schools and libraries throughout northern Mexico. We will publish information about how to obtain a softcover copy of the book in upcoming issues of BATS.

We congratulate Arnulfo Moreno and Eugenio Clariond, and we look forward to seeing this beautiful new book in the hands of thousands of students and adults, who will shape a new conservation ethic in Mexico.

For more information on the goals and accomplishments of the PCMM, please refer to the Fall 1995 and Fall 1996 issues of BATS. 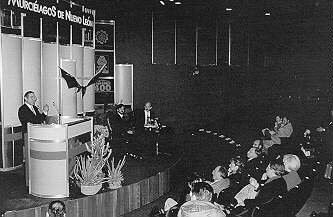 Eugenio Clariond presented the new book Murciélagos de Nuevo León to the press and public with a gala reception, at the same time announcing that the Mexican Nature Conservation Fund had decided to make bat conservation one of their highest priorities.