BCI’s North American Bat House Research Project is off to a good start. Nearly 800 Research Associates have signed up in 47 states in the United States, two provinces in Canada, and Belize and Trinidad. The project was initiated this spring as a result of a BCI study on bat house use [BATS, Spring 1993]. Designed to gather additional data on bat preferences in artificial roosts, the research project enlists the active participation of volunteers to make observations on their bat houses. Participants then return the information on a standardized report form to BCI for inclusion and analysis in an ongoing database.

Together they built and tested BCI’s new nursery house designs (as seen in the Spring 1993 issue of BATS) for adaption in southern climates. Investigating a variety of heat-sink and insulation materials, they monitored each bat house roosting chamber with different treatments and solar exposures throughout 24-hour cycles. After extensive tests of internal temperatures, the team modified two of the large nursery houses, attaching them back-to-back to enable heat exchange and greater thermal consistency. On September 9, these prototypes were hung 25 feet up on a metal pole on Steve and Marianne Sprinkel’s organic farm near Austin. Finally, a single tin roof with a four-inch overhang was attached one inch above the wooden roofs to protect the houses from potentially excessive midday heat. When first checked for occupancy six days later, six cave myotis had moved in.

This winter, the Motorola team anticipates building and placing 14 additional pairs of the large nursery houses, three at Motorola headquarters, and the remainder at additional organic farms in the Austin area. Houses will be tested with further modifications and with different colored exteriors to provide a range of roost temperatures. Team spirits are high, and by the end of next summer, we should know a great deal more about how to accommodate bats in hot climates, thanks to the dedication of our friends at Motorola. Texas Governor Ann Richards has congratulated Motorola and BCI for their cooperative efforts in conservation. 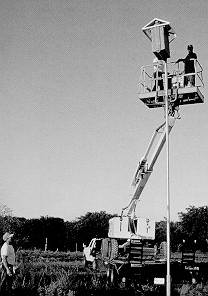 These back-to-back bat houses were occupied only six days after Motorola erected them on an organic farm in central Texas. A single tin roof placed over both protects them from excessive midday heat.