In our last newsletter we reported how an animal rehabilitator, June Tooke of Queensland, Australia, had reared an orphaned Black Fruit Bat. The bat, Boris, was gradually returned to the wild in the fall. Last spring it returned to visit Mrs. Tooke, after apparently having joined other bats in seasonal migration. At last report Mrs. Tooke had discovered that Boris was not a he after all but an expect ant mother!

Boris has since given birth. Several times she has brought her baby to Mrs. Tooke’s home, where she has allowed it to be petted and photographed.

Now a friend of Mrs. Tooke’s has written to tell us about her own orphaned bat rehabilitation program. Helen Luckhoff finds “foster mums” for orphaned baby fruit bats. She writes, “This year I have placed between 30 and 40 into homes and as far as I know only five haven’t survived. When the babies still have a cord or are very small I try to keep them a week or so or have a couple of ‘spe cial’ helpers. Currently I have four adolescents in my sitting room, the ages 6-10 weeks.”

Mrs. Luckhoff also reports that “All the animals are very, very lovable. Children (including my 3 year old grandson) can go into the walk-in enclosure and scratch and play with them. We don’t unhook the bats but they often climb off and onto whoever is handy.” She and Mrs. Tooke care for at least two kinds of flying foxes. The Gray-headed Fruit Bats (flying foxes) are especially beautiful, with furry slate gray bodies and bright orange collars.

In concluding a recent letter Mrs. Tooke says, “Make use of my story as I hope it will save some bats and dispel the myth of bats hurting people . . . It’s only people who harm them with their kill if it moves idea.”

(Editor’s Note: These women are experienced animal rehabilitators. Although bats are highly intelligent, likable animals, we do not recommend that they be sought as pets. Most require specialized diets, and sick bats, that at least in the New World might endanger one’s health, are those most likely to be found.) 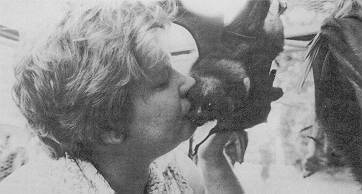