Since working for BCI, I’ve encountered many activists, but none have personified the word quite like Randall Foy of Springfield, Virginia. I first met Randall last summer at BCI’s Bat Management Workshop in Pennsylvania and was astonished by the extent of his enthusiasm for environmental causes. He’ll do just about anything to get involved: he has erected bat houses in Virginia parks, lectured to community groups, and written newspaper editorials to rebut misleading articles. Randall even took his campaign to his job at Safeway Supermarket and inundated the employee newsletter with bat facts. But that was only the beginning. He soon called me with an idea he had to raise financial support for BCI.

With the assistance of his local United Way Agency, Randall initiated a storewide campaign through which the Safeway employees could automatically deduct $2 or more from their paychecks toward a year-end contribution to a designated nonprofit organization. Randall championed BCI, adding lunchroom posters to his already aggressive newsletter promotions and announcing that he would hold a lottery among participants for prizes he had purchased: a bat video, a one-year BCI membership, and an "adopted" acre of rain forest. His strategy of educating and rewarding worked, and his original goal of $2,000 was exceeded with pledges of $2,704.

"I thought $2,000 was an ambitious goal in the beginning," Randall told me, "but I quickly realized it was too conservative."

More than 30 percent of Randall’s co-workers pledged to BCI through the United Way campaign, and we will receive the funds generated at the beginning of 1997. Needless to say, we were impressed with the outcome of Randall’s idea. But, of course, Randall wants to push the limits. "I did a little ‘bat math,’" he told me, "and if all 13,000-plus members of BCI could raise similar funds, we would have more than $26 million for bat conservation."

Wishful thinking, Randall. Keep it up. 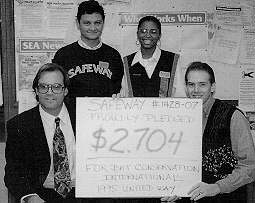