I kept saying, ‘It’ll bite me; it’ll get in my hair.’ They kept saying, ‘No it won’t; you’re wearing gloves.’ Finally I just reached my hand out and touched it, and that’s all it took. In a split second, I was over the fear. I thought, oh my, these are cute little things here!"

Joyce Thurau laughs when she tells about overcoming her lifelong fear of bats. Once a cowering woman afraid to be outside when the evening bats were flying, now her life is filled with bats. What happened? Thurau credits the Pataskala, Ohio, library, where she headed when she decided to confront her fear. Although the book she found contained information that delighted her, she still felt fearful. From a note in the appendix, she contacted Bat Conservation International (BCI), signed up for the North American Bat House Research Project, and later attended one of BCI’s five-day workshops in Pennsylvania. There, on her first night of mist netting, she fell in love with bats.

"I thought they were so adorable, I didn’t want to leave. When I finally got home, I looked for bats in the driveway, like I always did, but this time I wanted to see them!" She immediately built and installed six bat houses around her home.

Upon discovering a newspaper ad that read "Bats–Interested?" Thurau became involved in another bat-related project. "This lady’s tractor was getting wrecked by the guano from all the bats in her garage, so I said I’d help her." Thurau sought advice from BCI about methods of excluding bats, and invented several of her own. She found that flue tape–thin metal tape with adhesive on one side–was excellent for covering cracks, and she screwed four-inch-wide pieces of vinyl floor coving around the edges of the garage doors, hoping this would seal off any bat entrances while still allowing the doors to be used.

Last summer, seeing a notice in BATS magazine, Thurau volunteered to participate in a bat census project on the Utah-Arizona border under the aegis of the Bureau of Land Management. With five other women, she lived for three months in a small camp at the foot of Mt. Trumbull, Arizona, 90 miles from civilization, and worked every night setting mist nets and then identifying, weighing, counting, and marking the bats the group caught. "We set the nets over water," Thurau explains. "The bats are easier to catch because they’re coming in for a drink of water. As they swoop up from the water, they fly into the net."

"We marked them so we wouldn’t count them again," she adds. "Only once did we catch a marked bat. They’re smart–you won’t fool them twice," she states with admiration. During their three-month stint, the volunteers netted over 600 bats representing 16 different species. They also caught nighthawks, giant black beetles, and mud puppies–and in general, had a wonderful time.

Returning from Arizona, Thurau set out immediately to find another opportunity for fieldwork. "I was sending my résumé and letters to everyone I could think of," she says, "I was on the Internet every day, looking for possibilities." In the process, she discovered that many of the summer fieldwork positions require college degrees, a factor that has prompted her to return to school.

Between classes and bat research, Thurau finds time to interest her seven grandchildren in bats. She has recently written and illustrated a story about "Branden Bat" for eight-year-old grandson, Branden, who already knows some of the Latin names for various bats, and she always includes a bat-inspired item, such as a puppet or book, in birthday packages. If Thurau can help it, none of her family, friends, or neighbors will ever fear bats as she once did.

Tell us about an Outstanding Member You Know!

Do you like reading Members-in-Action profiles? Well, perhaps you can help alert us to more members to profile in the future. Or better yet, write a profile yourself. Despite the overwhelming number of BCI members involved in bat conservation, many worthwhile efforts may remain unknown to us–unless you report on them.

Profiles can range from half a page (250 words) to two pages (1,000 words). We typically try to feature members who:

– have an inspiring level of dedication to bats and bat conservation, or

– have original ideas for getting involved with bat conservation, or

– have combined their unique talents with their interest in bats in an unusual way.

Lisa W. Kroeber is a BCI member and volunteer writer for BATS. She is also a remodeler of old homes, an author and photographer, and a retired junior high school teacher. She lives in San Francisco, California, and Leverett, Massachusetts. 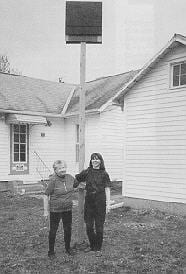 Thurau (right) poses in front of a back-to-back pair of bat houses she installed in the Nashport, Ohio, yard of Donna Pletcher (left). Thurau built the houses as a replacement home for a colony of more than 300 bats living in Pletcher’s garage. While she is still working to seal off the many bat-sized entrances to the garage, more than 130 bats have taken up residence in the pair of large "economy-style" bat houses, which she made with plans from BCI’s Bat House Builder’s Handbook. This summer, Thurau has observed at least two dozen new pups in the bat houses. 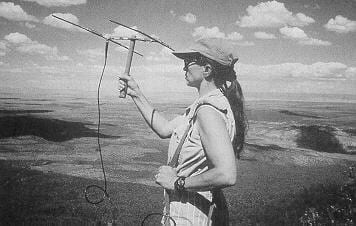 Thurau tracks a bat with a radio transmitter on Mt. Trumbull in Arizona as a volunteer for a Bureau of Land Management bat roost inventory project in the summer of 1997.