John and Jane Newman’s farmland in Allen County, Kentucky, has a rich history, traceable to the early 1800s when a blacksmith named Carpenter made his home on a prominent cliff. To bat fans, however, the land’s more recent history may be the most interesting. Carved into the bottom of the cliff is a limestone cave that houses a colony of endangered gray myotis (Myotis grisescens) each summer. When the Newmans purchased the property in 1990, about 700 bats inhabited the cave. Seven years later, there were an estimated 4,100. By 1999, the Kentucky Department of Fish and Wildlife Resources counted more than 11,000 bats, including young pups.

“Carpenter Cave is a very important maternity roost, and the colony is doing extremely well,” says Kentucky Endangered Species Biologist Traci Wethington, who has been monitoring the bats for several years. “A lot of people see cave ownership as a liability and bats as a nuisance. But the Newmans take great pride in their cave, and they have definitely contributed to its success.”

Indeed, since learning about BCI and becom-ing members in 1991, the Newmans have been actively working to keep intruders out of the cave and to remedy past damage. “It was a party area for years,” John Newman explains. “I’ve hauled enough trash out of there to start my own landfill.”

Although they have owned the property for a decade, the couple didn’t build a house on the site until John retired to the life of a “gentleman farmer” two years ago. “We haven’t seen any evidence of unauthorized use of the cave since we moved in,” Jane says. With their home high on the bluff overlooking the cave, it’s no surprise that people are less likely to risk trespassing. For added security, John, a former high-tech executive, built a light-activated alarm that addresses uninvited guests with a message he recorded himself:

“[police whistle] Stop where you are. This property is posted, and this cave is posted. Leave now. If you proceed further, you will be photographed and prosecuted. You have been warned.”

Jane laughs and says, “He sounds like ‘the Terminator’!”

The Newmans believe far greater numbers of bats likely roosted in the cave in the past, based on roost stains and guano deposits that measure 20 feet across. “I’m sure the bat population has changed over time as human interest in the cave has gone up and down,” John speculates. He and Jane have collected a file of historical information on human uses of the cave. A newspaper clipping from Independence Day of 1917 shows that it was once a community gathering place on holidays and other occasions. Other reports tell of saltpeter mining during the War of 1812. Inside the cave are remnants of vats the miners built to leach nitrate salts from the earth to make saltpeter, the principal component of black gunpowder.

Human disturbance these days is limited to occasional visits by botanists studying plants at the cave entrance, along with Traci Wethington and other Kentucky Fish and Wildlife biologists who count the bats every other summer. The Newmans assist with the count–first the adults as they emerge just before darkness falls, then the pups that remain inside the cave without their mothers. “We’ve taken a great interest in the bats,” John confirms in obvious understatement. “Jane thinks she’s their mother!”

Currently, the Newmans are debating the rather costly purchase of a night-vision scope to better view the emergences. In addition, they are working with wildlife professionals and other bat enthusiasts to figure out where their gray myotis colony goes to hibernate. Their two main prospects right now are a cave about 40 miles away in neighboring Tennessee or a well-known Kentucky cave that houses hundreds of thousands of bats each winter. Lastly, they are hoping, as they do every year, that this summer even more bats will discover the safe shelter of Carpenter Cave–protected for the first time in two centuries. 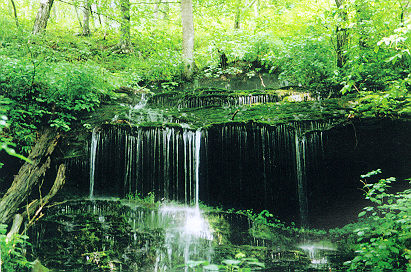 A waterfall cascades from beneath the Newmans’ house down the bluff to Carpenter Cave. An even better water source for the bats lies only a few hundred yards away, where the Barren River flows by the Newmans’ land. 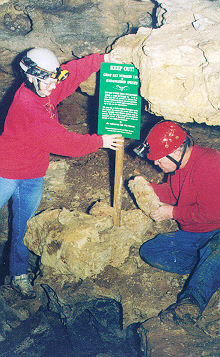 Inside Carpenter Cave, John and Jane Newman install a sign explaining the importance of the site as a nursery roost for gray myotis.

The Kentucky State Nature Preserves Commission awarded the Newmans this plaque in 1997, marking Carpenter Cave as a Kentucky Natural Area. The Newmans are also encouraged in their land stewardship by the Kentucky Department of Fish and Wildlife Resources, whose biologists visit the cave every two years.