BCI member Bob Wisecarver won’t let his 77 years keep him from doing what he loves: designing and installing bat houses. As an Honorary Research Associate of BCI’s North American Bat House Research Project, Wisecarver is the architect of more than 45 unique bat houses, no two of which are exactly alike.

How does a retiree from the industrial field become interested in bats? "I’ve always been involved in the outdoors,"says Wisecarver, a resident of Walnut Creek, California, adding that he spent a lot of time in nature as a scout, eventually attaining the rank of Eagle Scout. "As a kid on my grandparents’ ranch, it was my duty to shoot my BB gun at birds eating fruit in the orchard,"he laughs.

From this unlikely beginning came an interest in birds and building birdhouses. Through a network of bird-house and barn-owl-box enthusiasts, Wisecarver was connected with a bat house builder in Southern California who sent him a copy of BATS magazine. After reading an article about Tony Koch, an organic farmer in Oregon [BATS, Spring 1993] whose bat houses attracted bats that helped control corn earworms in his crops, Wisecarver was off and running, or rather . . . building.

"What really got me going,"Wisecarver says, "is that you can solve these problems without using poisons."He took a trip to meet Koch and proclaims, "He put the fire in my belly."

Since that time about five years ago, Wisecarver has been using his mechanical know-how to experiment with different styles of bat houses. His backyard is a construction zone of miniature homes. "My wife calls it a mess,"he snickers, gesturing at the patio littered with various pieces of wood. Wisecarver uses BCI‘s Bat House Builder’s Handbook as his starting point, then adds his own touches to see for himself what will encourage bats to come roost. His adaptations are based on acute observation and creative insight. "We have such a hot climate here that I’ve started to place shade panels on the sides of bat houses,"he mentions. Another design he is using adds a loft in which mother bats can leave pups. He has also experimented with carpet inside houses after finding a colony of about 100 bats roosting between burlap bags hanging in a barn.

Currently, 23 of the 37 houses Wisecarver has in service are occupied by bats. His most common residents are little brown bats (Myotis lucifugus) and Mexican free-tailed bats (Tadarida brasiliensis). He regularly visits and photographs his many installations across north central California, traveling in an RV he affectionately calls "the batmobile.”

"The key to my bat house business,"he adds, "is that almost all the materials are free."He diligently collects construction scraps or wood from old fences wherever he goes.

Wisecarver often branches into more complex forms of bat housing as well. One of his most unusual undertakings was at a dam at California’s Pardee Reservoir. A colony of Mexican free-tailed bats had been displaced when their roosts in the dam’s runoff tubes were sealed with concrete during a renovation project. The East Bay Municipal Utility District asked Wisecarver to figure out some way to coax the bats back. In a cavity in the dam’s spillway area, Wisecarver installed a 10-foot-square "room"with a plywood frame. He placed multi- and single- unit bat houses inside the room, then left two holes in the wood-frame wall for bats to use as an entrance.

"It took off like crazy just one year after installation,"Wisecarver recalls. When he later found bats clinging to the walls inside, he installed additional single-panel roosts. The colony has now grown to between 750 and 1,000 bats.

In the long range, Wisecarver hopes to build a large bat house in every marsh refuge in California’s Central Valley. Those of us who have seen his work certainly won’t be surprised when he succeeds.

Carolyn Straub is a journalist and BCI member living in the Bay Area of northern California. Originally from Syracuse, New York, she has also lived in Alaska and New England. 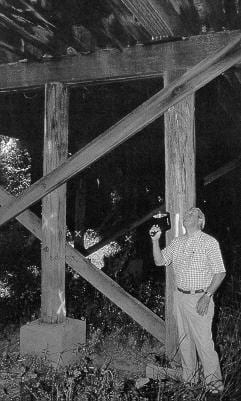 Under a bridge, inside a dam, or in the middle of a field–wherever Bob Wisecarver sees a good place for a bat house, he usually builds one. His success in attracting bats results from regular monitoring and making alterations, when needed, based on his findings. 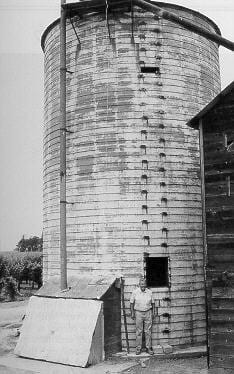 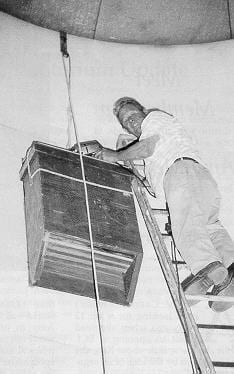 The owner of this unused silo had seen Mexican free-tailed bats (Tadarida brasiliensis) emerging from under the roof overhang for years but couldn’t find any trace of them inside. Wisecarver mounted a bat house inside the silo to see if it might attract bats. While drilling, he realized the silo had hollow walls and the bats must have been roosting inside. Despite this discovery, he left the bat house up, then removed a concrete block from the wall to make an easy bat entrance and exit. The house is now used by bachelor bats.