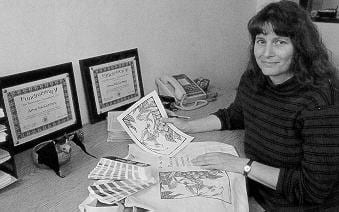 Amy McCartney wasn’t even looking for a job 12 years ago when she read about an opening at BCI. While she knew little about bats, she was intrigued by the idea of an organization dedicated to their conservation. "I couldn’t resist applying,"says Amy, "It sounded like such a unique place to work.”

It was early 1987–BCI’s fifth year–when she joined Executive Director Merlin Tuttle, Accountant Linda Moore, and former BATS Editor Mari Murphy Houghton in a cramped two-room office at the University of Texas. At the time, BCI had about 1,500 members, and Amy worked diligently to cultivate each one, in addition to answering phones and responding to an endless pile of information requests.

When a spring 1988 article in the New Yorker brought an avalanche of information requests, donations, and memberships, Amy had her first indication of how her job would grow. She and the rest of the overwhelmed staff worked long hours to handle the correspondence, which resulted in 3,000 new members joining BCI in just a few months.

Now many years (and many articles) later, BCI has grown to more than 14,000 members around the world–all of whom have heard from Amy in one way or another. She sends out new member packages and renewal notices and replies to correspondence. In addition, she manages the entire membership budget. Until assistant Hella Wagner came on board in 1995, Amy was still handling this ever-increasing workload by herself.

"I’m incredibly organized at work, but you should see me at home,"Amy laughs. "That’s when my creative side takes over."With her classical guitar in the corner of her office and ceramic pots and tiles from her home kiln decorating the bookshelves, it’s clear Amy has talents beyond keeping BCI membership running smoothly.

In fact, creativity plays a significant role in Amy’s job. She was instrumental in developing BCI’s popular Adopt-a-Bat program, which has generated more than 5,000 new members. She also designs and produces member benefits–the special gifts members receive for joining at certain levels. Recently she teamed with BCI’s "webmaster"Bryan Ockert to transfer some of the most time-consuming membership tasks onto BCI’s web site. The resulting on-line renewals and memberships are bringing tremendous savings in time, paper, and postage costs. For her continual efforts to cut costs and boost revenue, BCI has presented Amy with its annual "efficiency"and "fund raising"awards.

Co-workers are often amazed to find Amy is familiar with just about any member name they mention. "Some names really stand out,"she explains, "like the occasional celebrity or non-human member–we’ve had dogs, cats, and even a racehorse. But it’s the personal messages people write on their renewal cards and letters that are most memorable."She notes that the reasons people join are as varied as the people themselves. Some have joined because of guilt over long-ago mistreatment of bats. There are even a few members who are not very fond of bats, but recognize how important they are. Yet the vast majority simply find bats fascinating and want to help protect them and their habitats.

Amy and BCI have proven to be a good match in many ways. She particularly likes the organization’s policy of not selling membership lists or wasting resources on mass mailings. "Once I got a letter from a member that simply said, ‘Thank you for your silence,’ "she recalls with a smile. Amy also takes pride in BCI’s philosophy of reporting on conservation progress rather than resorting to dire accounts of impending environmental catastrophe–another practice that often brings letters of thanks from members.

"It’s a privilege to have a job you really believe in,"she says. "Where else could I find a position this cool?”