BCI member Helen George has been awarded the Medal of the Order of Australia for her conservation work, particularly with flying foxes (BATS, June 1986). Only 125 of these awards are presented each year, and they are approved by Queen Elizabeth II. George is one of Australia’s “bat mums”, a wildlife rehabilatator who raises baby flying foxes, among many other animals. Infants near urban areas are often orphaned when their mothers are electrocuted by power lines or killed by farmers.

The Ku-ring-gai Bat Colony Committee in Sydney, Australia is “delighted that at last Helen has received recognition for the years of late nights, early mornings, careful recording of information and making her animals and information available to scientists and the public.” BCI congratulates Helen for her award and applauds her special efforts to educate people about flying foxes. 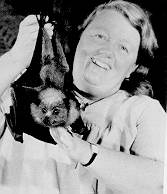 Helen George poses with one of her favorite friends. PHOTO BY MERLIN D. TUTTLE