In an effort to protect critical habitat for endangered bats, the Oklahoma Bat Caves National Wildlife Refuge was officially dedicated on April 1, 1986, encompassing five separate parcels of land in northeastern Oklahoma. The refuge is a part of Sequoyah NWR. Numerous caves found in the area harbor a majority of the world's population of Ozark Big-eared Bats (öPlecotus townsendii ingens), a rare subspecies of Townsend's Big-eared Bat (P. townsendii). The only other known colonies of Ozark Big-eared Bats are in bordering areas of Arkansas.

The U. S. Fish and Wildlife Service listed the Ozark Big-eared Bat as endangered in November 1979, and the official Recovery Plan was completed a few years later. The plan addressed most of what was known about the species at the time, which was very little. Due to its secretive nature and propensity to be easily disturbed, the Ozark Big-eared Bat has never been investigated thoroughly.

Research was ongoing long before the refuge was established, but when the bat was declared endangered, the U. S. Fish and Wildlife Service took charge of coordinating the efforts, and the task was assigned to the Oklahoma Cooperative Wildlife Research Unit at Oklahoma State University. William Puckette and Brenda Clark currently are the principal field investigators.

With extensive knowledge of the terrain and its geology, Bill scours the crevices of northeastern Oklahoma's Ozarks searching for isolated colonies. Great care is taken to locate landowners and gain their permission to search for more caves where Ozark Big-eared Bats might be found. Brenda concentrates on the bats themselves. So much is unknown about them that many things she discovers are new revelations to us. With the aid of a night-vision scope hooked to video recording equipment, Brenda is able to accurately census several species of bats as they emerge from a cave. The large ears on Ozark Big-eared Bats provide the distinction needed to separate them from other bats. With the use of video equipment, disturbance caused by a human near the cave entrance will not affect the results.

The disturbance factor is a part of every facet of the research. Ozark Big-eared Bats, like others of its genus, are more easily disturbed than most bats. With only an estimated 1,000 left in the total population, any wrong move could push them closer to extinction. For this reason, any work done is carefully weighed against the impact it might have on the species. With many imminent threats facing them, it is imperative that we not only move quickly, but cautiously as well.
Perhaps the greatest threat to the species is human disturbance. Ozark Big-eared Bats are very aware of any activity within their roosting cave, and little gets past their long, sensitive ears. Excessive human intrusion has caused some populations to abandon their traditional caves to seek more remote locations.

Most land managers in northeastern Oklahoma have not considered bats in their long-range plans. Clear-cutting of hardwood forest is increasing yearly with site conversion to pine plantations a common practice. Contamination of groundwater occurs all too frequently, yet no ongoing monitoring is taking place. More and more forest land is cleared for housing developments, some within a stone's throw of major maternity caves for Ozark Big-eared Bats.
Other threats may be too insidious to detect, but are considered in the ongoing research. Pesticide applications may be causing decline as bats feed on insects. Insects are being sampled near the caves to determine pesticide levels and types of insects present, and guano is also being tested to identify the kinds of insects actually eaten, as well as for the presence of pesticides. It is still uncertain what type of prey these bats prefer.

Management of a disjunct set of caves stretching across northeastern Oklahoma is a challenge in itself. With the nearest cave 45 minutes from headquarters, quick response to any emergency is unfeasible. Although the remoteness of the caves increases the time and effort needed to reach them, it also helps keep most curious individuals away.

The management philosophy so far has been to keep the cave locations secret. As small as the tracts are (some only 80 acres), it would be unwise to attract attention to the presence of endangered bats, and therefore signs and fences have not been placed around the areas. If disturbance becomes evident, other protective measures will be implemented.

Education has been singled out as the best defense against all threats to the bats, and in this respect, Bat Conservation International has helped a great deal. With the vast amount of information made available by BCI, the managers at the refuge have put together interpretive programs to tell the story of bats and their benefits. BCI audiovisual programs and brochures have reached numerous residents in the area and are being incorporated into local teaching workshops. Visitors to the refuge have been so enthusiastic about the bats and their preservation that they are spreading the word to the local community and beyond, gaining allies in the struggle to save the species from extinction.

The responsibilities and role of Oklahoma Bat Caves National Wildlife Refuge is expanding. The search for more caves sheltering these endangered bats continues. Acquisition of caves and buffer zones around them is being planned, and new protective techniques are being tried. In years to come, the refuge may expand to also include protection for other cave-dwelling species of special importance. Managing populations of endangered bats is not easy, but with diligence, dedication and the valuable help we are receiving from organizations like BCI, our efforts will continue. 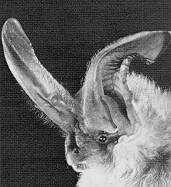 Bats of the Genus Plecotus have unusually long ears which are highly mobile— curled against the neck when hibernating, often pointed straight forward in flight. PHOTO BY MERLIN D. TUTTLE