A news clipping, a phone call, and a member who changed an entire town . . .

Each day the mail at BCI brings news clippings from members, informing us about local issues and alerting us to potential problems. While we aren't always able to respond quickly to urgent pleas to "do something," we sometimes can enlist the assistance of members who can.

Earlier this year a clipping from a member in Atlanta, Mrs. Duncan Gray, alerted us to a situation in Sandersville, Georgia. A primary school lunch room had been "invaded" by hundreds of bats, forcing students to eat elsewhere. Parents were concerned, teachers were "near mutiny," and student reactions ranged from fascination to horror. School officials didn't know what to do.

Mrs. Gray also enclosed a check and asked us to forward a copy of Merlin Tuttle's book, America's Neighborhood Bats, to the school. We then called on another BCI member, Sue Barnard, lead keeper of the reptile house at Zoo Atlanta. Sue frequently lectures about bats to school groups throughout Georgia. She contacted the school to offer help, which they gratefully accepted, and found herself lined up to speak to students (and parents) there and at three other area schools. The event received statewide coverage, drawing the attention of other bat experts from surrounding states, who also offered help.

Sue gave a total of six lectures to over 1,600 students in four schools, winning the hearts of many with the two live bats she brought, a big brown bat and an Indian flying fox named Raman. Both children and teachers showered her with enthusiastic thank you notes afterwards, and at least one fourth grade science class maintained their new-found interest in bats by building bat houses (with the help of fathers, stepfathers, and grandfathers). The school solved its "bat invasion" by safely excluding them, and the cafeteria is once again in use. Thanks to Sue's hard work (and Mrs. Gray's tip), Sandersville, Georgia will never feel the same about bats. Everyone seems to be happy with the change (most especially the bats). 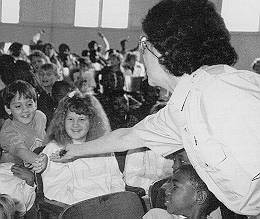 Excited students learn about the tiny bat that Sue Barnard has in her hand.