Two species of long-nosed bats, Leptonycteris sanborni and L. nivalis, are expected to be added to the U.S. list of endangered and threatened wildlife and plants this summer. These bats are found primarily in Mexico, but also occur in Central America and reach the United States at the northern extent of their range.

The only known L. nivalis colony in the U.S. is in a small cave in Big Bend National Park in Texas, and even though the cave is protected, the colony is believed to have suffered a 90% decline. A U.S. Fish and Wildlife survey revealed that populations in Mexico also are severely declining.

In the United States, L. sanborni today occurs only in extreme southern Arizona, but once was also found in central Arizona and southwestern New Mexico. L. sanborni has disappeared from most of its former roost sites in the U.S., the most dramatic of which is the loss of the Colossal Cave population of 20,000 when the cave was opened for tourists in the 1950’s. During a survey of known roost sites in Mexico, the species was found in only three places with very few bats at two of them.

Habitat disturbance is suspected as the major cause of decline for these bats. As cave-dwellers, there are only a limited number of roosting sites that provide the necessary conditions. Many of these are subject to disturbance and even destruction. In parts of Mexico, where virtually all bats are considered vampires, control efforts have frequently caused the death of all species in a roost, long-nosed bats along with vampires.

The loss of these species could have a severe effect on desert ecology in the areas where they occur. The proposal in the Federal Register (Vol. 52, No. 128) to list them as endangered states:

“Leptonycteris is thought to be the most important pollinator of some paniculate agaves [century plants] and of the giant saguaro and organ pipe cacti. When the bats move northward in the late spring and summer, they are largely dependent on these plants. At the time they turn back south, and are concentrating in northern Mexico, the only blooming plants available to them are agaves. These agaves, however, are being intensively harvested by ‘moonshiners’ for production of tequila.

“Excess harvest, and other factors resulting in the elimination of agaves may have contributed substantially to the drastic decline in long-nosed bat populations. In turn, the drop in bat numbers over the past several decades has coincided with a decline in the reproductive rate of agaves. For example, herbarium specimens of the species Agave palmeri from the Rincon Mountains of Arizona indicate pollination success of 80-100% in 1938-41 when the area supported the huge Colossal Cave colony of L. sanborni. In 1976, after this colony had practically disappeared, the fecundity of A. palmeri was 0-10%. Other agaves, as well as the saguaro and organ pipe cacti, may also be affected, and there is concern for the future of entire Southwest desert ecosystems.”

Dr. Merlin Tuttle recently visited an area in the Sonoran Desert in northwestern Mexico on the Gulf of California to photograph L. sanborni pollinating three species of the giant cacti that depend on them. At this time of year, the saguaro, organ pipe, and cardon are all in full bloom there, and the bats were eagerly feeding on the high calorie nectar and protein-rich pollen. Tuttle found only a hundred bats where several thousand had been reported in the 1960’s.

Annual bat migrations appear to be timed with the flowering of their various food plants. When the cacti are finished blooming, some of these bats will move northward into southern Arizona to catch the bloom of later flowering cacti and certain agaves before moving back south again. Without long-nosed bats, the most familiar sights of the Sonoran Desert— the giant cacti— could eventually disappear, and along with them, food and habitat for many other animals, potentially resulting in a chain of linked extinctions. 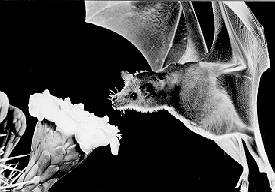 Above: A long-nosed bat (Leptonycteris sanborni) peers into the pollen-laden flower of an organ pipe cactus. The bat’s long muzzle and tongue are specially adapted for bat pollination. A split second later, the bat’s head will disappear into the flower.

Below: The most famous sight of the Sonoran Desert, the giant cacti, eventually could disappear without long-nosed bats. All three species of cacti in this scene rely on them for pollination.
PHOTOS BY MERLIN D. TUTTLE