IT WAS A SUNNY DAY in October 1969. As I came out of a muddy little cave, I didn’t yet know that the University of Denver Outing Club trip I was on would change the course of my life dramatically: I was bitten by the caving bug.

After my fateful trip, I started buying any books I could find about caves or cave life. I hunted for bargains in used-book stores, frequently finding titles I already owned, but buying them anyway because the price was right. The summer of 1976 found me at the National Speleological Society (NSS) Convention in West Virginia. I brought a box of duplicate books to sell, and within an hour they were gone; my trip to the convention was paid for, and I had found a way to finance my caving trips.

That same year, I celebrated Halloween weekend with a visit to the first Cambridge Antiquarian Book Fair at Harvard University. It was there that I met a book dealer from California who told me he had just given away some antique prints of bats. He promised to try and find some more for me. Two weeks later, five prints came in the mail with a note: "You can have these for $15.00 or dinner in the spring when I get back from California." I chose to buy the prints, but we corresponded all winter.

In the spring, he showed up with a portfolio of some of the finest bat prints I had seen. Over the next three months he talked me into spending my life savings on books and prints. I have never been sorry. We were married late in the summer, two weeks after I set up a booth at the NSS convention where I sold more than I ever imagined.

That winter, friends who owned a cave-book business called Speleobooks decided to sell out. I borrowed money from my father and bought it. I now owned a comprehensive book and art shop and began selling old and new books, prints, and gift items, all dealing with bats and caves.

My first contact with bat research scientists occurred at the 12th North American Bat Research Symposium at Cornell University in 1981. It was there that Merlin Tuttle talked to me about a new group he was forming: Bat Conservation International. I joined on the spot. From then on, Speleobooks took a turn toward more bat-oriented items. When I could not find an item that depicted bats in a friendly manner, I had them made.

Inevitably, I found myself being referred to as "bat woman." My brother even jokingly called me an "old bat." It stuck, and my husband gave me an OLD BAT vanity plate for my van. I used all of this foolishness to the bats’ advantage and was never at a loss for words when a snide comment was made.

Since I was also teaching full-time then, I took advantage of the slide shows that BCI produced. I let it be known that for small donation to BCI, I would give talks about bats for any grade level, and I became a popular speaker in several of the local public schools.

Now I manage Speleobooks full time. Often, I am able to change attitudes by just wearing bat jewelry and letting the conversation move naturally to why there are advantages to having bats around and why anyone could like these small animals. Bats and caves are now my life. Little did I know the direction it would take when I emerged from that muddy cave in Colorado 20 years ago. 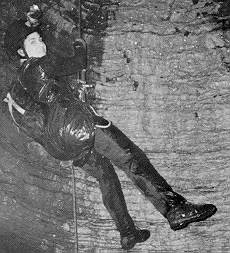 The first time Emily Davis Mobley went caving she didn’t know it would become a way of life. Today she runs a unique book store specializing in caves and bats.