"Learn all about Bats!" the announcement proclaimed, and about forty adults, a sprinkling of children, and one small dog trudged eagerly through the fields of London’s Holland Park, to the Ecology Centre, where our lesson would begin. As we crowded onto folding chairs, Clive Herbert, the conservation officer of the London Bat Group, flipped on the projector and began his presentation.

"There are fourteen species of bats in England," he told us, "Holland Park is London’s most important site for bat roosts, while Brompton Cemetery, which comes a close second, is alive with bats. The species roosting in this city are principally pipistrelles (Pipistrellus pipistrellus), noctules (Nyctalus noctula), natterers (Myotis nattereri), and brown long-eared bats (Plecotus auritus). The pipistrelle is most abundant and roosts in houses under the eaves, or in the many bat boxes that

Clive went on to tell us about each of England’s bat species and their habitats. Habitat destruction similar to that facing American bats has taken its toll on British populations as well. The loss of many old barns and the conversion of woodland acreage to agriculture are responsible for much displacement. The growing popularity of canal boating has disturbed bats that roost in tunnels and bridges over inland water routes. And a law mandating modern reinforcements for every bridge in England has destroyed long-standing roost sites under bridges.

At about 9:00 p.m., with the sky darkening, we began hiking into the park. We stopped at a pond surrounded by tall trees–the perfect place for a bat cocktail party. Clive showed us the bat boxes erected the year before and then demonstrated the bat detectors he had brought along.

In about half an hour, the first pipistrelle appeared. At less than two inches in body size, with delicate, pointed wings, it was twisting, turning, and moving so rapidly that many of our group missed it. Soon a flurry of the little bats appeared, diving for an evening sip. Clive got quite a reaction when he pointed out that each of these tiny animals can eat an estimated 3,500 insects a night.

Next came the brown long-eared bats, twice the size of the pipistrelles and easily recognizable by their huge ears. These bats feed among tree branches and were difficult to see. The noctules came last, although they are usually the first species to emerge. Their narrow wings span 15 inches, and their characteristic flight pattern–steep dives for insects from the tree tops–make them easy to identify.

It was a remarkable display, particularly for an urban site. I was cheered to see that some of Britain’s bats have managed to survive alongside humans in this enormous, busy city.

Emily Malino Scheuer is a BCI Founder’s Circle member and a frequent contributor to BATS. She joined the London Bat Group while living in London for the past two years. 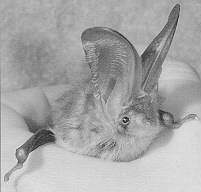