James Cave, only a few hundred yards away from Coach Cave, houses one of the three largest hibernating populations of endangered gray bats (Myotis grisescens) and a smaller population of Indiana bats, also endangered. When the Park Mammoth Resort agreed to reopen Coach, they also permitted old steel gates at two entrances to James Cave to be replaced by angle-iron bat gates.

Tens of thousands of bats did not survive when a stone wall with a steel door was originally erected inside the main entrance to James Cave over 25 years ago. The door was designed for people, not bats, and cave tours into the bats’ traditional hibernating chambers further disturbed them, causing the population to plummet.

When Merlin Tuttle apprised the resort of the problem in early the 1970s, they terminated public tours into the bats’ hibernation area and provided a less restrictive gate at the main entrance. Since then, the population has more than doubled from approximately 100,000 bats. Even so, the gate was not ideal for bats and allowed vandals to break in, which posed a continued threat.

The new bat-friendly gates, which were erected as part of the Coach Cave project, are now in place and should greatly enhance continuing recovery. This time when the bats return for their long winter’s rest, they can enter safely and sleep in peace. 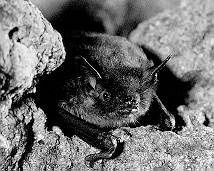 James Cave is home to one of the largest populations of endangered gray bats known. New gates over the entrances will help ensure their continued recovery.