In southern India near Madurai, Samanar Hill rises from the surrounding fields, a mass of rock composed largely of granite. Inside, the hill is honey-combed with caves, important archeological sites as well as homes for thousands of insectivorous bats of nine species. Distributed among eight caves, these bats have likely roosted in Samanar Hill for thousands of years, critical contributors to the health of the local environment.

The biology and behavior of some of these species have been the focus of 11 years of studies by BCI Scientific Advisory Board member Dr. M. K. Chandrashekaran, and a team of researchers assisted by Dr. Gerhard Neuweiler of West Germany. The results of research on the bats of Samanar Hill have been published worldwide. Dr. Chandrashekaran is head of the Department of Animal Behavior at Madurai Kamaraj University in Madurai, where he studies the circadian rhythms of bats.

Other caves in Samanar Hill contain archeological treasures. Sculptures and carvings were left by the Jains, a religious sect who lived there during the sixth century when the hill was a trade route stop. Jain monks still worship at Samanar, and local villagers believe it to be their protector and the home of their patron god.

Although Samanar Hill is considered a “protected national monument” and has been a popular spot for tourists and local picnickers, it was close to ruin earlier this year. Years of nearby stone quarrying and dynamiting had altered its rainfall catchment area, and as the water table receded, the once numerous springs stopped flowing. Surrounding vegetation died, and birds that once gathered near the spring-fed ponds also disappeared.

When quarrying leases for Samanar Hill itself were auctioned to a small group of villages on encroaching lands, strong protests followed, not only from Dr. Chandrashekaran and his research team, but also from the Archeological Survey of India and many nearby villagers who felt strongly that a “sacred hill” should not be violated. Agriculture flourishes around Samanar, and the majority of villagers do not have to rely on income from quarrying.

While Dr. Chandrashekaran lobbied locally, he urgently requested that BCI write a letter of protest to the Collector of Madurai, where the quarrying leases had been issued. Dr. Merlin Tuttle responded, pointing out the potentially negative environmental consequences of continuing to dynamite in the area, which could result in destroying the roosting caves of resident bats. Insectivorous bats are the most important predators of night-flying insects and include in their diet many that are considered crop pests, an important fact to consider in a predominately agricultural area. Reports from other parts of India indicate that past losses of bat populations have resulted in substantial environmental damage.

Citing BCI’s letter and another from Dr. Chandrashekaran, the Collector responded by cancelling the leases and prohibiting any future quarrying “for the purpose of conservation of bat populations as well as the archeological monuments”. 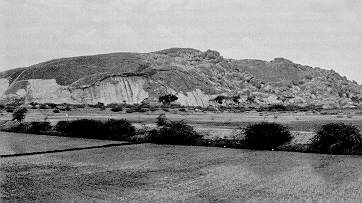 Samanar Hill, with its inner complex of caves, is over a half mile long. PHOTO BY M. K. CHANDRASHEKARAN